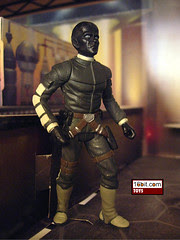 Bio: The Mos Eisley Cantina is a wretched hive of scum and villainy. For the Sakiyan bounty hunter Djas Puhr, the cantina is a fertile refuge ripe with opportunity to catch a fugitive bounty or pry information from customers who know more than they claim. (Taken from the figure's packaging)

Commentary: Djas Puhr ("Jasper," get it? I didn't) is a super-obscure Cantina alien that odds are you never saw in the movie, but now you own as a toy. He has a fantastic sculpt with loads of detail, and articulated wrists for reasons I still don't quite get. His action-oriented pose is not necessarily sensible given his place as a drinker, but at least he has holsters for his blasters. If you look at his costume, it probably has more detail and texture than the real thing. Hasbro did a freaking fantastic job on this one. There are straps and patches, boots, and just enough paint that the figure really does look like a dude in makeup. He has some difficulty sitting due to his belt and the lower part of his jacket, but you can cram him in a booth of needed. I suggest making him stand is the way to go.

Collector's Notes: This figure was pretty common and is relatively worthless. As such, get one for next to nothing and take solace in the fact there will likely never, ever be a reissue. It's worth having around, it's pretty nice looking up close.

I, too, would never have guessed "Jasper." I still call him "DEE-jas Pur." Why should that first "d" be silent anyway??

I knew it was "Jasper". Also, most people don't realize the reggae themed Zepplin song "Dyer Maker" is similar in that it's pronounced "jam-aica". Get it? Reggae, Jamaica? lol

Agreed, a terrific figure of a nothing character -- like so many cantina aliens. Sometimes I wish they would move on and do something new, but so many of these cantina guys are so terrifically well done that, hey, keep doing them. I admit previous cluelessness at both this name and the Led Zep reference. FotD: educational and entertaining.

Anyway, Djas is an okay figure, maybe a tad too action posed, but not terribly so.

Him being a bounty hunter is on the list of cliched jobs for Cantina aliens/background characters.