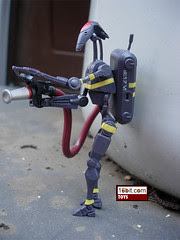 Bio: Firefighter droids scramble to extinguish fires on the Malevolence after the Separatist ship is attacked by Republic forces. The droids blast the flames with foam as General Grievous' deadly new flagship tries to escape its pursuers. (Taken from the figure's box.)

Commentary: The Firefighter Droid takes the basic Battle Droid design and tweaks it with revised arms and a new head, plus new accessories. The articulation is slightly improved as a result of the new arms, but it is otherwise largely the same as previous Battle Droids except for the heroic deco. It really seems odd having a robot painted up like a real-world firefighter, but it does look cool enough to warrant buying if you ever see this one, and you likely will not. The backpack does make it difficult for the figure to stand, and it is a little awkward trying to pose him with the firepack accessory, but you gotta admit it looks cool. Ultimately, that's your reason for purchase-- if you like the paint, it's worth your while.

Collector's Notes: This figure was tough to come by, and it may require a slight premium to get one if it doesn't get reissued. As it came in the final wave of the Clone Wars line, this may well be it for a while, if not forever. Here's hoping Hasbro reissues it in a gift set! I'd love to have a few more of these.

I was fortunate enough to find one at Target several months back, and I can safely say it's my favorite Battle Droid (and I generally don't care for them). It's the deco that done me in!

Yeah, the figure looks neat. I may actually seen one once, but as usual the limited articulation and my mixed feelings about battle droids made me pass it by.

Odds of a reissue are probably pretty dang unlikely. It was unusual of them to release a non-combatant, but then, not much new tooling was required...I suppose.