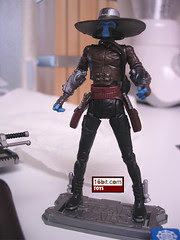 Bio: Cad Bane avoids his pursuers on a pirate's speeder bike. The bounty hunter forms a temporary alliance with a pirate gang to further his own selfish interests. When his business with the gang is finished, he takes leave of the thugs-- snd also takes one of their speeder bikes as part of his payment. (Taken from the figure's packaging.)

Commentary: While Cad Bane and this bike have yet to appear on screen together, there's nothing stopping Hasbro from employing a little toyetic license to bring out a fun toy with an all-new version of the Bounty Hunter. (Or at least, new enough.) Rather than simply tweak the existing Cad Bane toy, Hasbro really did a job on this one-- the torso is much wider, the legs have an amazing range of motion, the arms are, well, assembled funny so you have to swivel them around, and the head is all-new. If you have the existing Cad Bane, you need to get this new one because a) it's significantly different and b) it can sit, which the carded release cannot.

Rather than reuse the head, Hasbro gave this version of Bane a nice snarl. His hat still flies off if you aren't careful, but a lot of nice minor details like the fact his knees can bend back far enough to convincingly ride the bike show that Hasbro isn't allergic to fixing its toys so they work as top-notch playthings and display items. Seriously, this one is really well done. If you plan on getting the Xanadu Blood when it hits later, be sure to get this Cad Bane so you can have a figure who can actually sit. The detail and paint are roughly what we're used to from Hasbro, so overall this is a good piece and a nice improvement.

Collector's Notes: Available now, the set is actually moving nicely. The bike belongs to the Ohnaka Pirate Gang, which so far have not been produced as toys which can sit. This one is actually worth the effort to track down, so be sure to get it. The other version is also worth having, but for different reasons related to his costume.

I love this figure. The facial sculpt is great and the figure's frame is much more substantial and menacing. The first Cad Bane figure was built like an emo teen.

I'd love to see this figure revisited with soft goods and some new pieces to replicate the trenchcoat look. Ball-jointed hips would also rock.

"Emo teen," eh, Mike? Kewl. Then I like my first edition Cad "Emo Teen" Bane and need for nothing more.

Of course, if/when this is re-released with soft goods, then I'll spring for a new "emo teen"/great figure.