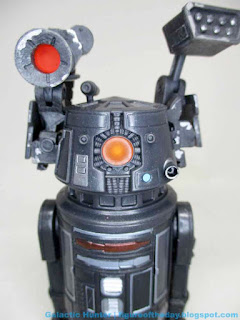 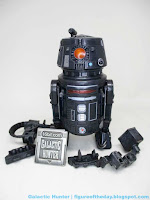 Commentary: A retool, but not a bad one. BT-1 builds on the R2-D2 mold and adds a new dome and lots of extra accessories, making it feel like a pretty good deal in its day. R2-D2 was always on the smaller side, so it's nice when Hasbro bulks up the figure with other stuff to make it a better toy. This particular model is based on the Marvel comics series from the new 2015-era comic books, but also draws a lot of inspiration from classic Kenner "Battle Droids" prototypes that never came to fruition. A number of robot mock-ups with extra firepower represented a lost line from about 1986, so it's nice to see that drawn on for more recent efforts. 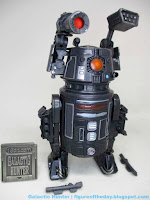 Essentially R2-D2 painted in the dark grey - almost black - colors like a lot of Imperial droids, Beetee stands apart with a new, R5-esque dome. A giant eye has a gradient paint job for his eye, with a bright orange dot in the center that fades out toward the edges - it's very retro. The panels are largely silver, with an extra dongle on top of the head. On each side are removable panels, and you can plug in some massive firepower in there - and then put the panels on the guns so you don't lose them. (The 3 3/4-inch figure does not have that feature.) This is a really impressive remold. 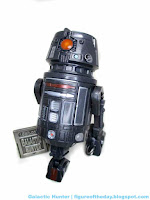 What's more, R2-D2's prequel arm rockets are left out but the hooks are still there. Now you can add extra weapons in there, although you'll need to find somewhere to store the extra panels. If that weren't enough, the retractable third leg is present, as are the opening chest panels with the claw arm and datalink arm accessories. 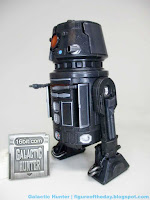 Deco is good - there's nothing exceptional here, but you'll like the blue light on the dome, the silver panels, and the few pained highlights on the weapons. The copper panel cover on the torso is a nice touch, but the legs are sadly more or less molded in color. The center leg has a little bit of paint on it, which is better than nothing and certainly nothing to sneeze at.

As a resculpt of a resculpt, I particularly enjoyed the unpainted, outer R5-style eyes on the dome on the split panels and I always got a kick out of giving an R2-style robot a complete arsenal at his disposal. As a kid, I often played with R2-D2 as a cannon - just flip the body up, and it looks like it could shoot projectiles. This takes that idea and pushes it to an almost ridiculous level, resulting in a striking and admirably goofy concept that looks like it could have been made in the 1980s or 1990s. Since it came out in 2019, it shows there's still an appetite for fun in the world for those who get lucky enough to pre-order it online, otherwise it costs too much. If you can get it at a fair price, snap one up immediately - even if you don't like the comics, it's a great little bit of worldbuilding and a distinctive personality from the publishing program.