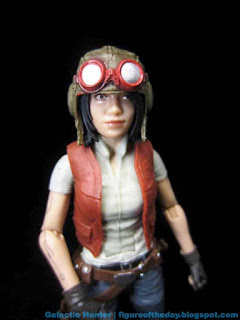 DOCTOR APHRA Marvelous
The Black Series The Force Awakens-Era Line Look, 6-Inch Figure
Item No.: Asst. B3834 No. E6052
Manufacturer: Hasbro
Number: #87
Includes: Helmet, blaster
Action Feature: n/a
Retail: $19.99
Availability: June 2019
Appearances: Comics
Bio: On a mission gone wrong, Doctor Aphra finds herself at the hands of a formidable Sith Lord, Darth Vader. A rare survivor of such meetings, Aphra is recruited by Vader for her skills in reprogramming droids and her apparent lack of remorse for breaking the law to get what she wants. (Taken from the packaging.) 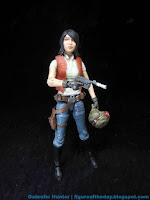 Commentary: You never know for sure what will be a big deal or not, but non-movie figures with short runs tend to get expensive in short order. Doctor Aphra was part of a later wave, right before the assortment got a new SKU, so she wasn't around terribly long and now commands over $100. (I am against this. You should be able to get one.) The character was an early breakout star of Marvel's Star Wars comics reboot, starting as Darth Vader's sidekick/assistant/collaborator and eventually getting her own book. Being first has benefits, and her popularity endures to this day.

While the figure does share elements of tooling with Jaina Solo, Chelli Lona Aphra recreates her character design from the comics quite well. A departure from some other breakout comic stars like Amaiza, the Zeltrons, and Darth Talon, Aphra gets such rare accoutrements as pants and a complete shirt. But does she get pockets that actually work? We may never know. The figure uses the photo-real deco on her face - fun, as he never had a real-life model - but it looks good. Her eyes have a little sparkle, but there's a little color bleed around her eye shadow areas. This was sort of common with some of the earlier photo-real printed figures, and later toys are a lot better. The brown vest has a hint of weathering on it, and it looks superb - the same is true of her shirt. The pants are also nicely textured, and the fingerless gloves... OK, those could be better. There's a little slop there. 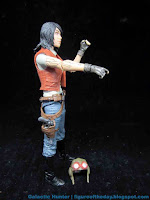 Due to her release in 2019, Hasbro was still noodling around with articulation, making her a mix of amazingly good joints and some notions that have since been phased out. The double-jointed knees bend all the way back, plus she has an ab-crunch joint as well as a chest swivel. Sadly, her elbows can only bend to about 90-degrees - we've better figures in 2018, so it's a pity that they weren't improved here. Her hands have no problems holding her blaster, which fits well in a holster.

Because it's the 21st century, modern design aesthetics have crept in to stories timed around the original Star Wars film - I've got mixed feelings about this. Her ensemble seems to evoke Han Solo and other smugglers, and that's perfect - I love her flight cap with goggles, too. She also has circuitry tattoos, and ink in the 1970s was mostly reserved for sailors, bikers, and rockstars - it was a rarer thing. Obviously it's a big galaxy, but in the entire original trilogy tattoos are far and few between, so it always struck me as a little odd if you're trying to capture the design philosophy of the Carter era. (They weren't, obviously, this is my hang-up.) They're only on one arm, and everything else about this figure is pretty amazing.

If she gets reissued for a lower price, you should pick her up. It's an amazing figure - her droid pals 0-0-0 and BT-1 are no slouch either - so I'd recommend picking one up if your budget allows. Fairly few modern Marvel-era characters have been made as figures, but the series continues to pick up new readers and is likely to keep doing well - meaning more figures can't be far behind.