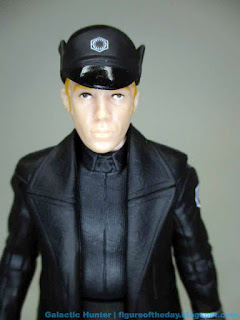 Bio: A young, ruthless officer in the First Order, General Hux has complete confidence his troops, training methods and weapons. (Taken from the packaging.) 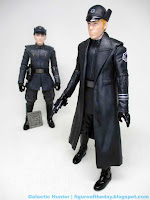 Commentary: By the time that First Order General Hux came out, fans stopped caring - the run size was initially pretty low before someone initiated a rerun, making the figure seemingly not-terribly-desirable if you compared the low secondary market prices against the availability. (I never saw this one in an actual store - just Asty, once.) For whatever reason, the new guys from The Force Awakens and The Last Jedi - and most of The Rise of Skywalker - failed to strike a chord with the core audience for The Black Series. It even took a while for that audience to warm up to the new scale, as the first waves in 2013 sat around (except Boba Fett) for quite some time. By the time Hux came out people who just saw the movie wanted the then-sold-out Rey and people weren't super interested in Screaming Space Fascist Weasley.

Upon his debut, this was a new sculpt - and when Hasbro did another 6-inch First Order Officer figure, they didn't reuse parts here. It's a pretty impressive release with a coat from his "let's shout from the balcony" scene as well as a hat, and of course he has a partially-painted blaster without a holster. The hat does not appear to want to come off. The costume looks great, with silver trim, glossy black boots and gloves, and an ornate hat that do wonders in completely drowning out the facial details of this figure. The hat's First Order symbol and glossy trim look superb, but also drown out the human face that has some painted hair and eyes... and that's it. The lips are incredibly pale and Hasbro no doubt took note when they did the First Order Officer figure later, as he seems less like the waxy corpse that we got with Hux. This isn't to say Hux is a bad figure - if anything, he's an excellent sculpt that could benefit greatly from a makeover in the Archive collection. You can tell the sculptors did a great job, but the slightly-waxy flesh plastic combined with no make-up or facial details may fall flat with 2021 audiences, much like fans seemed to more or less ignore him completely in 2015. 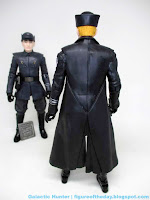 Articulation is typical for his day, with double-jointed knees, rocker ankles, and perfectly fine hips which are blocked by both a skirt and a coat. On one hand you have to appreciate Hasbro putting in the extra articulation that you paid for, even if it's basically superfluous. On the other hand, Hasbro could probably keep costs down and drop the price of the assortment by taking functionality into account and leaving out joints you can't possibly use - especially since they opted to not reuse parts of this figure for other First Order officers for whatever reason. Even if they didn't cut our costs, they could have put the extra tooling money into deco and an extra 20-30 pennies could do wonders to giving Hux the snarling, twisted performance we got to see on the big screen for the character's memorable debut.

It's great that Hasbro made this guy - even as a year-end wave that initially didn't see much distribution - and made more later so fans who missed him could get it. But also fans didn't really show up for this one. (Check your collection, I can wait.) Heck, mine even stayed in the box until somewhat recently and I like the figure and the character a lot. The coat detail is great, the fine texture on the uniform is superb, and I love the clean silver lines on the sleeve. But - and this is increasingly an issue for me - these tip-top 6-inch collector figures aren't much fun. They stand, and thanks to the ankles they often topple over. There are virtually vehicles or playsets to use with them, unlike other toy lines that practically demand that you interact with them and get some sort of fun results. For fans of the sequel trilogy, this is a must-have figure until/unless a redeco comes out with an improved head. I hope they do it eventually, but I assume that the sequel trilogy - and General Hux - will be swept under the rug like the prequels for a few more years. You kick the sequel movies like the football. Oh! Oh movie jail for the sequels. Movie jail for the sequels for One Thousand Years!!!