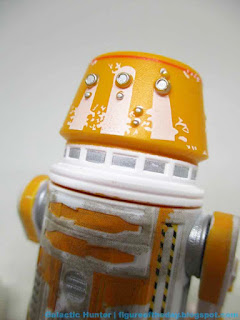 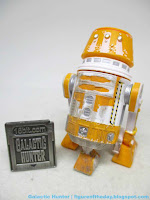 Commentary: Not a member of D-Squad - but he has the upgrade markings! C2-B9 is another fixture at Galaxy's Edge, and he got a figure for reasons I need to find out. It's a good figure! It's not one I would have selected to exist, but I love the coloring and it's pretty close to the prop minus a few tweaks. The somewhat weathered deco comes across pretty well, and the quasi-Creamsicle orange with oranger bits and the caution tape all add up to a distinctive robot. It also looks a bit like Hasbro's R5-A2 droid, one of the build-a-droid figures.

Molded in orange, the head has white and silver trim around the neck and special weathering painted running down the three eyes. There are hints of flaking-off paint added around the head, and it translated nicely to plastic. There's even a dark orange ring circling the head. The top of the dome has white panel lines and dark orange pie slices, giving it a look of a 1980s plastic orange juice container. I like it.

The body is molded in white with abundant painted detail. There's a big orange swipe on the back that looks bizarre, but cool - I've not seen anything else like it on a droid. On top of that is some weathering, which is some of the absolute best weathering deco I've seen out of Disney. The front has some as well, but the back is absolutely stunning - it's better than any other droid I've had. The front is no slouch, with grimy orange paint also covered in dirt. I think the dirty deco is more impressive on the figure than on the prop photos, and the caution box is a little smaller than on the actual prop - but it's remarkably good. I would've expected Disney to trim some of the deco, but it's easy to see a bunch of opportunities for detail to show off just how far figure paint has come. 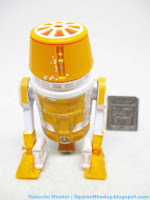 On the body, I mean. The legs aren't quite as good - you can see white panels missing on the feet, with white panels on the center of each prop foot completely missing on the toy. Some orange is also missing on the middle part of the legs, the sides of the figure are white rather than orange. There's less weathering on the toy than on the prop, but it's not like it's a huge deal. The colors match nicely, and it certainly is good enough to make the figure look better-than-average because the body and head do much of the heavy lifting here. There are no wires on the feet, and there's some nice weathering over the orange spots that don't show up particularly well unless you're looking at them under bright light.

If you don't have an orange R5-style droid, this is the one for you. Get the set, you'll like it. Unless you have too many figures, in which case there's not much to say other than this is one of Disney's better droids. I think it helps that we get fewer robot floods, so Disney does a better job on the ones we do get. Now where the heck can I buy a R2-RNBW dagnabbit?