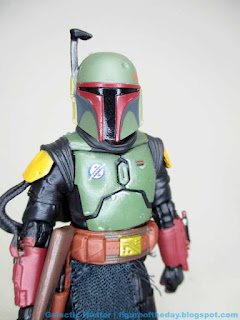 Bio: With his customized Mandalorian armor, deadly weaponry, and silent demeanor, Boba Fett was one of the most feared bounty hunters in the galaxy. Over the course of his career, he became a legend. (Stolen from Target. There is no on-pack bio.) 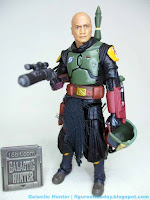 Commentary: While the price is appalling, the Boba Fett (Morak) is an excellent 3 3/4-inch action figure. Similar to the Throne Room version, the figure has great armor deco, excellent face paint, and a lot of moving parts - but so do the $14 retail figures. I assume they're charging us a Boba Fett tax now (but I have no proof) and I also assume Target's short attention span on new exclusive releases may mean this could be on clearance pretty quickly. The on-shelf date was intended to be October 2, but I found one October 1 and lots of fans found them trickling out in September. I assume the production run is massive. 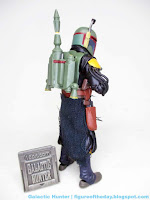 Temuera Morrison's face looks good - too good - for this figure. On the show he had pretty gnarly skin, and his appearance on the show once he repaints his armor is a bit of a mystery. On The Mandalorian, the helmet is his face once he gets it back. On The Book of Boba Fett, he doesn't wear it much. It's a good head - it just could stand to look a little worse, with a little more paint, especially for $21. The subtle wrinkles on the brow are fantastic, the eyes are piercing, he's just absolutely excellent - and hopefully there's a "Tython Jedi Ruins" version coming somewhere with appropriately gnarly skin. It's a weird place to be here, because they captured the actor's face pretty dang well here. This is another "hall of fame" sculpt for realism, and whoever put in the work should be applauded. 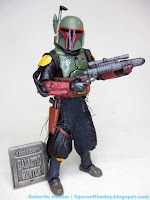 The same is true for the body - the joints are cut in ways that aren't obtrusive. The swivels are good, the knees bend well, the boots are painted nicely, the knee pads are separately molded pieces. The helmet looks great (except it lacks an articulated rangefinder), the jet pack is excellent (but the rocket isn't removable), and the blasters are both pretty good too. His hands are accepting of the accessories, and as much as I feel it's my job to give you a reason to not buy the figure, I don't have one. But I'm biased - I love the show, and the costumes on the show are some of my absolute favorites. The repainted armor is good, with just tiny hints of the painted-over scuffing. The belt buckle is excellent, and it looks like the backs of the hands reuse the Scarif trooper armor, just like Mando, and just like the Boba costume on the show. I love the tiny painted detail on the wrist rocket, and the red lights on the chest armor are so subtle you could miss them. The big pants are still here and the joints are, once more, well-hidden. The knee joints are behind massive pant legs, which are covered by some cloth robes that further hide some of the detail. It's also in front of the holster, which has a blaster that fits incredibly well. He can stand, he can sit, and you can squeeze him in the existing The Vintage Collection Slave I vehicle... which I assume means he'll fit in the 2022/2023 version too. Depending on if you prefer the Book of Boba Fett look or not, this could be one of the very last Boba figures you ever need to buy. It's great. You can spend the $21 and know you don't have to buy him again and again unless you really want to, and I'm honestly very happy with the Retro one I already had - but this is much more impressive, and you can see why it's twice the price.

It's unpleasantly expensive, but if you're being choosy about your figure purchase at least it's a good one and not another undercooked rerun. I worry that the price will continue to keep creeping up while the variety of this line continues to be rather blah - but they delivered on what the future Boba Fett of your dreams may well be. Grab it if you see it at a price that suits you, and hopefully it won't bother you as much as it does me.