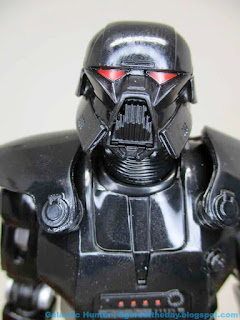 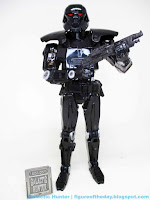 Commentary: The Mandalorian continues to be Star Wars, mercifully getting much of The Black Series' love and the ongoing storyline's best designs and ideas. This Dark Trooper was a major force on the show's second season, but older fans will recognize it as a central focus of the classic Dark Forces PC game. This figure feels like an updated pastiche of the three phases of robot enforcer, bringing in a popular and memorable character from the old Expanded Universe to the new Mouse-approved continuity. You'll also recall Grand Admiral Thrawn, loads of concept art/RPG items, and so many other goodies that I assume Mara Jade has got to be on the short list. With the Fromm Gang. Because to not do those would be cruel. 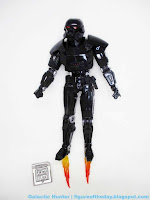 When Hasbro started doing "deluxe" figures I generally rolled my eyes - in most cases they weren't much better than the complex, multi-part basic Chewbacca figure we keep getting time and again for various Wookiees. Sometimes we get a few more accessories, but is it worth the extra cost? This might be one of the few times where I begrudgingly say yes. The figure has a lot going for it, and one thing I absolutely hate that isn't a dealbreaker. Just calibrate those expectations for a release that's almost the Dark Trooper figure of your dreams. 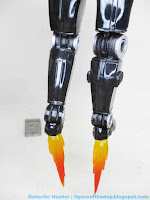 When it comes to deco and articulation, this figure may be the best Hasbro has ever done. The elbow rotates at both ends, and bends. The fists are removable, and the knees also swivel on both sides. He can't sit, but with close to 30 joints he's no slouch. Unless, of course, you want him to slouch, because the double-jointed neck and ab crunch let you do that. I love that he can grip his blaster with both hands, I'm loving that he can punch a door, and I'm surprised his hands hold the blaster with no fuss - that's a rarity. It fits like a glove! The glossy finish with silver joints looks marvelous, but I'm not crazy about the clear center of the joints. It's just like K-2SO - it gets the job done, but it's not pretty, it looks kind of cheap - but it's fine. For a tall, shiny robot made of tons and tons of parts, you have to do what you have to do to make it all work, and this figure is literally and figuratively head and shoulders above the basic figures.

But he's got a vest, and I hate it. Remember Masters of the Universe Classics? Those vests were largely form-fitting, sturdy things. This one is a bit of a floater - it covers up the robotic chest, so I assume it's sharing parts with another release. The shoulder pads move and are connected to it, but when you take him out of the box the first thing you realize is that the chest is hollow and squeezable. It's like a fake muscle suit on your invincible killer robot army, and while it looks superb, it feels like a cheat. I'm sure if a Hasbro designer is reading this they're rolling their eyes at me, but you don't want your big bad evil robot guy to feel flimsy. Considering just how well detailed the limbs are, how everything moves perfectly, how the sculpt perfectly matches the show, and how the red eyes peek out from the dark helmet-ish head, it would stand to reason that everything about this figure should be perfect. And let me tell you, it's close. 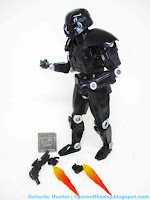 If your figures live in the box, you'll never notice - and if they go on a shelf and you don't touch them, who cares? But I think you'll want to play with this one. There are plenty of fun options in how to pose him, and with alternate fists and foot rockets that fit in the soles of the boots - such a clever idea! - you'll want to buy an army of these. I wouldn't be shocked to see exclusive variants with alternate parts some day, or another, similar robot sharing pieces down the road. There's a lot to like here and if they ever do a Tython meditation rock I could see them throwing in one or two more of these guys with Grogu and a price tag that would make you wince.

Should a Japanese toymaker crank out a kit with a solid chest or a die-cast metal edition, you'll probably prefer that one. The glossy black and articulation of this release is tough to beat and in a year with a lot of good figures, this could well be your Star Wars release of the year (between $20-$50, at least.) If you see it, get one. If you like it, maybe get two, and some sort of flight stand so you can use those otherwise semi-useless foot peg rockets.