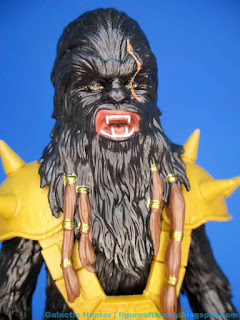 Bio: The ferocious and skilled Wookiee gladiator turned bounty hunter, Black Krrsantan has worked for the likes of Jabba the Hutt and Darth Vader. (Taken from the box flap.) 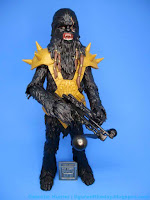 Commentary: Hasbro's really taken to The Black Series in recent years, particularly the myriad repaints, retools, and reissues at premium prices. Long after the figure's tooling debt was paid many times over, we're getting an upcharge on an upcharge for Chewbacca with Black Krrsantan. The figure's body dates back with the blue box Chewbacca from 2014, which was retooled and repackaged for the 40th Anniversary Chewbacca from Star Wars, a Vandor-1 Solo: A Star Wars Story version, a red-boxed The Force Awakens version, Zaalbar, a 40th anniversary The Empire Strikes Back version, a deco variant/repack for Galaxy's Edge, and of course the Archive Series version. Oh, and Amazon's The Empire Strikes Back 2-pack with the dismantled C-3PO. At the very least that puts Santo here as the 10th reuse of this body, and now that the basic figures are $25, it stings a little that suggested retail price of this re-re-reissue is about $28. Is it neat? Sure. Is it worth it, is it as cool as it could have been? Not really.

Made no doubt to tie in to The Book of Boba Fett where the Wookiee is bulkier, fluffier, greyer, and generally better looking, this comic-specific incarnation does a good job of serving its purpose - minimal new tooling to maximize a return on the investment while providing fans with something that is arguably new. If Hasbro put this level of work in a 3 3/4-inch The Vintage Collection figure, we'd probably happily accept it because we're used to it - but in the bigger line it's something of a disappointment. Back in 2014, the elbows couldn't bend very well so our dark-haired pal here has little room to move to carry his bowcaster. The armor is nifty, and the new head does a great job as an idealized version of his head from numerous comic book stories. You get the roaring mouth with pink painted interior, you get the scar, and you get some lightly-colored braids. What you don't get are uniquely colored fingers and toes, as Hasbro decided to skip deco completely on the limbs and body, unlike the many Chewbacca figures which have light brown and dark brown hair. Santo's armor has no paint, while Chewie tends to have multiple painted ammo cartridges. In effect you're paying more for less, and since a TV-specific Krrsantan is coming, I assume this version will be less desirable at some point next year. 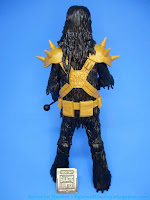 The fingers are pretty stiff, but you can pry them open to get the bowcaster in there. I vastly prefer the back storage, mostly because it's neat and frees up some space on the figure's sides on a shelf. Krrsantan joins Marvel characters 0-0-0, Dr. Aphra, BT-1, a new Leia, Jaxxon, and of course, Sergeant Kreel.

I admire Hasbro for coming up with a way to get a popular new character out quickly - even if, I assume, it was probably at Disney's urging before The Book of Boba Fett even aired. It's not great - but it's exactly the level of new elements one might expect when development started prior to anybody seeing the series. I appreciate that they went to bat and gave it to us, but on the whole The Black Series has been an interesting exercise in "good enough for now" with so many figures getting new faces or entirely new figures down the road. For those who love every new body type of Wookiee they can get, this is a must-buy. The sculptor did a great job on the head and the body, while dated, was excellent for its day. It's better than nothing, but something better than this is coming next year - so maybe you'll just want to wait a bit.