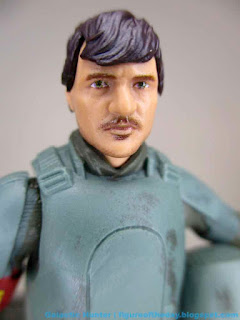 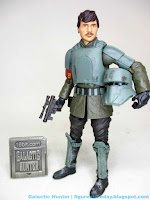 Commentary: "Haven't I seen you some place before?" Din Djarin (Morak) gives us the Mandalorian in an Imperial driver disguise. It's a time-honored thing - one of your heroes has got to wear the armor of the opposition, or it's not really Star Wars. Mando shares a body with the Target exclusive Space Boston figure, Migs Mayfeld, which went straight to clearance for some reason. Hopefully you got one, or several. 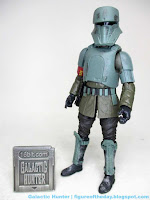 The figure looks like it came from a Han Solo (Mudtrooper) figure that doesn't exist - Hasbro could tweak this figure and get another squeeze out of the mold. Djarin's shoulders and legs seem to be the same as the Scarif Stormtrooper/Tank Driver molds, with new forearms and a new torso. And a new head. Also helmet. It's the rare "different enough to make you happy" release that sensibly uses the parts that were arguably mass-produced in-universe, while giving you appropriate new pieces. The good thing is that he can stand, sit, and hold his weapons. The bad thing is that we've gotten much better leg joints since then, so these go back to those annoying ones you got to get your fingers in and twist around. These aren't the good ones, but at least they can move. I expected more. The detail is as good as always, looking filthy and used, wrinkled as need be, and generally seeming like something that could've been off-camera on Endor or in a sketchbook of the original trilogy. It's the rare kind of "derivative" that's actually complimentary. 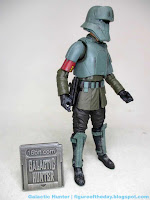 One place Hasbro can't skimp is the heads - and they didn't. Din Djarin got a nice head sculpt with a good portrait that looks a tiny bit flummoxed, complete with helmet hair molded as a separate piece. Things are clean and even, and most importantly you can look at it and go "Oh, it's Pedro Pascal" in the same way that you don't with Han Solo figures. The mustache is good, the eyes are clear, and the eyebrows are a little on the thick side - but it's usually necessary to exaggerate when you're a head the size of a pea.

If you're a fan of Mando, and you probably are, this is a figure you won't want to miss. The head is nice, the suit is good, the deco is great, the articulation is about as good as you can expect for three or four years ago. The helmet fits on the head and the blaster fits in the holster - other than all the hip joints being not fabulous, everything about him was engineered well and painted appropriately. I'd say get one if you can, or add it to an online order for something else to qualify for free shipping.