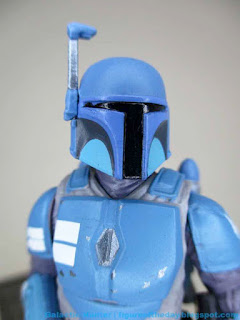 DEATH WATCH MANDALORIAN Scale Debut
The Vintage Collection 3 3/4-Inch Action Figure
Item No.: Asst. E7763 No. F4477
Manufacturer: Hasbro
Number: #219
Includes: Pistol, rifle, backpack
Action Feature: n/
Retail: $13.99
Availability: April 2022
Appearances: The Mandalorian
Bio: The warrior clans of Mandalore were believed to have been wiped out ages ago. But they were resurrected, and with them, their legendary combat armor that was feared across the galaxy. (Taken from marketing copy. There is no bio.) 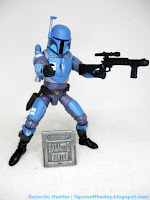 Commentary: Again, amazing. This Death Watch Mandalorian is from flashbacks in The Mandalorian streaming show, and it's spectacular. Sure, maybe the 6-inch ones will be better or whatever but the 3 3/4-inch one is so good it makes me hope Hasbro revisits Din Djarin. What we had for him was good, but now we see what Hasbro can give us? Go back to the well, redo Boba Fett, redo Jango Fett, go ahead and give Darth Vader another whirl while you're at it too. It's a good thing I like this mold, because Hasbro will be re-trotting out it for Axe Woves and the Death Watch Airborne Mandalorian. And, hopefully, whatever else they feel like. A trooper pack would be nice. 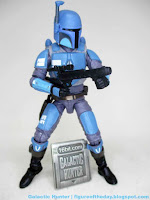 This figure looks just like on the show, with a grey body suit and blue armor. You get black boots and a mostly clean helmet, with some limited scuffing. You'll also see some silver highlights plus what I assume may be rank markings - as I write this I haven't seen a lot of reference books explaining everything just yet. The jet pack has some silver highlights and holes that seem perfect for flame accessories which, as of yet, don't seem to exist. The 2003 Boba Fett flame stand won't work without additional modifications to the figure or the flames... but Death Watch Mando's holster has a blaster that fits nicely, and the two-handed rifle can be gripped without much trouble thanks to the amazing articulation. Hasbro sculpted and painted this figure well, and their engineers put joints pretty much anywhere I could hope. I would buy trooper packs of this. As I write this, I hope Hasbro considers a box for SDCC/PulseCon/someone's exclusive with variant accessories and deco. It'll sell. They're very good. Have them fight Super Battle Droids or something... we haven't had a new one in years. 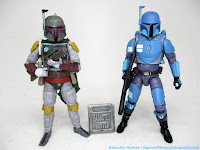 Articulation is worth praising, with excellent more-than-90-degree bends on the elbows and knees. The ankles and wrists move nicely, the double-waist joint is nearly flawless, and the ball-and-socket hip joints paired with swivel thighs are perfection. Those bend-and-swivel thighs are gone, which basically means that this figure is infinitely better than even last year's new Return of the Jedi Boba Fett. I'm getting so many cool poses out of this guy and he stays standing without help that I'm actually quite surprised - it's like when I first got a super-articulated Spider-Man figure. But better. 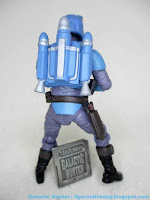 If you're a cranky old collector who only wants the very best, I feel you. Even if you hate everything new, make sure you get your hands on this figure - just play with a friend's, if you can. You'll go "oh, this is spectacular" and then you'll want 6 of him. I can't get over how good some of these new guys are, in part because the new hips and elbow/knee cuts aren't new technology and seem to use fewer parts than how figures used to be constructed. They just got smarter. I've been pretty complainy about paying $14 for a 3 3/4-inch figure, but if it's this good? The value is obvious - this is one of the very best figures Hasbro has ever done for Star Wars, and as an increasingly bitter and older fan it's going to keep me from wandering off as I look at metallic repaints with scorn. Hasbro, if you're reading, please repaint this mold as often as it makes sense, and feel free to go back to the well to give us yet another The Empire Strikes Back Boba Fett if it's done with this kind of articulation. After all, you haven't done an all-new super-articulated ESB Boba since 2008!

After an almost ten-year hiatus, it's figures like this that have lured me and my disposable income back to collecting Star Wars figures.