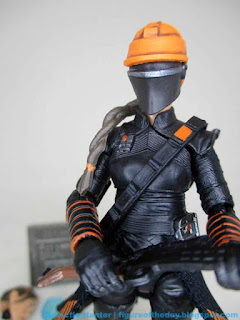 FENNEC SHAND Scale Debut
The Vintage Collection 3 3/4-Inch Action Figure
Item No.: Asst. E7763 No. F4471
Manufacturer: Hasbro
Number: #221
Includes: Braid, helmet head, unmasked head, rifle with strap, rifle, bottle
Action Feature: n/
Retail: $13.99
Availability: April 2022
Appearances: The Book of Boba Fett
Bio: An assassin and elite mercenary, Fennec Shand has worked for all the top syndicates. Clever, capable, and cunning, she is not to be underestimated and is full of surprises. (Taken from marketing copy. There is no bio.)

Commentary: She's good. Buy her. Fennec Shand has few nitpicks or quibbles, someone at Hasbro must have looked at the figure budget and said "Oh, we can make something really good here," which means that this new-and-improved style figure has confirmed that the reissues we've been getting are old and inferior. I don't know how long this figure has been in the making, but we first met the character in this costume in 2019. Also curiously, she's always worn the same costume, which means she has a closet full of the same outfit. But let's get back to the figure, which you should absolutely buy. You don't even need to read the rest of this review, she's the best figure in this scale I've bought (plus or minus some of last year's very best The Mandalorian figures), and you should go get her. If you miss her, I feel badly for you. 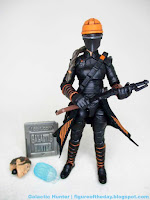 This figure spoils me. We've been sold a lot of figures where there's a lot of "it's pretty good except" or "if they could sit/hold a weapon/etc. it would be so much better." Here, she just works. The range of articulation is remarkable, with two well-hidden waist joints. And a neck joint that's sturdy, but removes without too much of a fight to swap heads. The arms and hands are jointed nicely enough and have enough give so she can hold a weapon with two hands. The legs swing forward, and we've got cloth elements so she can sit if you want. The knees bend 90 degrees so she could sit at a bar if you wanted. The costume sculpt also seems absolutely perfect. I have no bad things to say about how this figure was sculpted, this is a shining gem and the gold standard of what Hasbro can do in this scale in 2022. Given all the awkwardness we've been sold (and re-sold at higher prices), this figure tells us Hasbro should never, ever reissue an old figure and should just set fire to the old molds. Why should we settle for troopers that fall over or Jedi that can't duel with their lightsabers? We shouldn't - because Fennec was perfectly designed with the best joints we may ever see this year. I grouse about a lot of the 3 3/4-inch figures because for $14, I want perfection, and Fennec pretty much gives it to us. 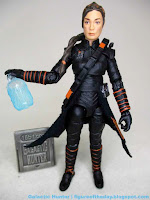 The helmet pops off and on the neck easily, but there's a new feature - the ponytail has to be removed and swapped from head to head. Strange! But neat. It gives you something more to do with the figure. The helmeted head has no face inside, so she can hold it in her hand, and/or you can pretend it's shading her eyes when it's on her head. Clearly, someone put thought into this. I particularly like the weathered detail on it. 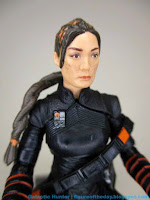 Fennec's Ming-Na Wen head is one of Hasbro's very best at this (or any) scale. It's her. It's not a vaguely Asian-looking person who's a woman - this is very clearly the actress from the show. The eyes shine, the lips sparkle, the eyebrows are on fleek, and she has just the slightest hint of having seen it all in her facial expression. The hair is decorated well, with the tiniest of strings painted within her locks. A couple of strands hang over her face. I hate to sound like a broken record, but it's so amazing that Hasbro should start fresh with every 3 3/4-inch figure from now on. Why are we settling for Han Solo figures that look like Han Solo but not Harrison Ford? Our Bo-Katan Kryze and Fennec Shand heads are just so good - it's sort of upsetting how low our standards were in the past, even for figures I thought were good at the time. 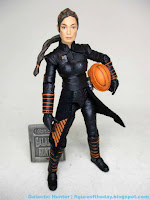 My sample has no problems holding her blasters whatsoever, but you do have to fidget a bit to get her to grip the bottle. The fact that she can hold it at all is impressive, so accessory interaction is excellent. I have no doubt that there are problems with this figure, but compared to Hasbro's usual levels of quality - which are pretty good - this is next-level. This is excellent. I'm not crazy about the cloth parts not quite covering up the front of the figures' legs as much as I would like, but it's quibble and soft goods are rarely perfect. (And some are outright awful.) We've bought so many figures that are good, or OK, or decent enough, that I sometimes forget what it's like to be genuinely impressed by a figure. To have a likeness this good on a head the size of a pea is amazing.

To have joints that work well on a figure that has a decent center of gravity so she doesn't topple over on my desk as I write this review is excellent. There's a big difference between having articulation, and having good articulation that lets you pose a figure just right so you don't have to worry about diving off the end of a shelf. I've settled for so many figures - gold figures, metallic figures - that this is a firm reminder that we should continue voting with our dollars and buy only the very best. This is it, kids, so skip all those carbonized figures (unless you really want them!) and put your hard-earned dollars to get this one.

Hopefully this means preorders are going to be shipping soon! Next to Corvus Ahsoka this is one figure I can't wait to get!