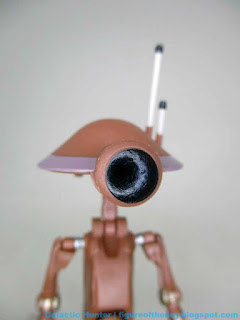 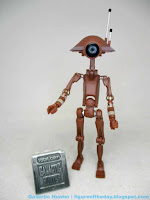 Commentary: I like droids, especially new ones. With so many repaints - even this set is sort of burdened with a few of them - a fresh face (in the scale) like this Pit Droid is welcome. While he has no accessories of his own, the $75 set does seem expensive. Thanks to recent price increases, a $25 K-2SO-style droid, a $25 Battle Droid, and a mishmash of 3 mini droids for $25... it's not terrible. It's not ideal, as I wouldn't have bought another Battle Droid at this point, but that's how they get you.

I can only assume more repaints of this Pit Droid are coming, and it's a good enough mold to consider buying in more colors. While it can't fold up under a tiny little saucer, it's loaded with articulation like an ab crunch, two elbow joints, ball-jointed elbows, and swivel wrists. This gets it pretty close - it's not perfect, but it's still impressive for the size that you can fold him down quite a bit. At about 4-inches tall he competes with similarly sized The Vintage Collection figures in terms of complexity and size. Who ever thought we'd get rocker ankles on a Pit Droid? I sure didn't, but the DUM-series has them.

Sculpting is good, deco is light - but more or less true to the CG models - and the design hasn't been in this scale before, so he's pretty exciting. A reddish brown robot with a subtle grey ring around the dome is nice, as are the painted antenna. I like what Hasbro did here, and if it were sold separately for $15-$18 or a $25 2-pack I'd say it's arguably worth that. As the most impressive, robust new part of a $75 souvenir set it's a bit ridiculous, but given that most "new" figures lately are reruns of some sort you might be fine shelling out to get something that isn't a photoreal of a figure you've already purchased once or twice. Also there's so little from The Phantom Menace that this is actually kind of lovely. Hopefully Hasbro throws in a tool or two next time, because you will probably want one or two more of these in different colors. Get it if the price for the set doesn't make you wince.