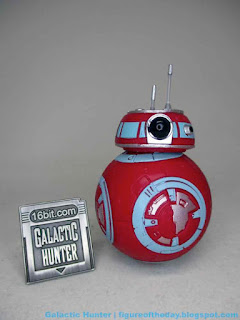 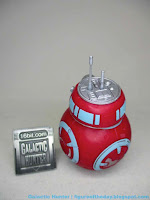 Commentary: I don't have anything to complain about here. CB-23 is another - and one of few - figures from the Star Wars: Resistance cartoon to make the transition to the 6-inch line. Considering that the show came and went with the sort of enthusiasm you reserve for a sneeze, it's kind of amazing that Hasbro gave us a new droid dome to go with this BB-8 retool. The BB-8 mold hasn't been used very much at this scale, and it's kind of amazing to think after 7 years this is only the second BB droid in this particular size class. I assumed we'd have had a BB-9E by now, but no.

If you missed Star Wars: Resistance, that's OK, I suggest you keep missing it. The show was the most colorful Star Wars has been since Ewoks and/or Droids, and was loaded with neat vehicles, cool aliens, and some excellent costumes along with some of the most dreadfully dull stories aimed at young kids you'd expect to see. The tie-ins to the sequel trilogy were few, but given how they can't actually spoil anything or tell you anything in the show you were left without a lot to go on unles you really loved the characters. While I could hang out with Flix all day long, he has yet to get his own spin-off.

CB-23 was BB-8's replacement, and is a pretty nice figure. The red roly-poly body has the same weighted mechanism we saw with BB-8, and there's no dirty deco or battle damage. It's just a nice clean robot with a newly-tooled dome, complete with wonderful blue highlights, a silver cap, and other painted silver and black detailing. I'd make some comment or snide remark about it if I could, or even say it's amazing, but it's just kind of exactly what you would and should expect out of this kind of a retooled action figure. The colors are all nice and bright, the paint is mostly incredibly clean and the antenna are, for some reason, almost translucent. But everything looks good. As a glorified accessory, this robot is charming and more colorful than most figures we tend to get.

There aren't many landmarks I can point to and say "this is awesome!" Top-to-bottom, it's an incredibly decent little robot that serves as a reminder that the designers behind Resistance did a great job and there may be some gold to mine out of the show if we ever get to a point where anything goes in action figures again. (It won't, so don't get your hopes up.) I wouldn't recommend this figure for the price of the boxed set, but it's nice enough that if you were going to buy the set anyway, it's not going to tick you off. It's good! You'll like it.