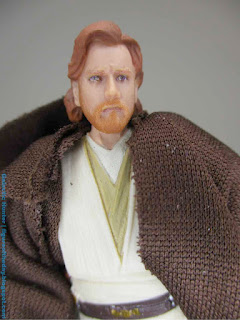 OBI-WAN KENOBI Re-redux
The Vintage Collection 3 3/4-Inch Action Figure
Item No.: Asst. F4486 No. F4492
Manufacturer: Hasbro
Number: #31
Includes: Cloth robes, lightsaber, communicator
Action Feature: Communicator hooks on back of belt
Retail: $13.99
Availability: April 2022
Appearances: Attack of the Clones
Bio: Legendary Jedi Master, Obi-Wan Kenobi was a noble man, gifted in the ways of the Force. He trained Anakin Skywalker and served as a general in the Republic Army during the Clone Wars. (Taken from marketing copy. There is no bio.) 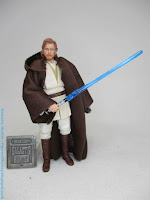 Commentary: This Obi-Wan Kenobi is a decent improvement of the 2011 figure, but with the photoreal face paint. The 2011 figure was a rerelease of the 2009 The Legacy Collection figure, which means the bones of this figure are 13 years old. That's ancient in toy worlds. The hope was that these reissues would improve the deco to the best of Hasbro's ability, and I would say in some cases they really did do a better job - this one is sort of a lateral move. I'd recommend this if you need (and do not have) a 3 3/4-inch Attack of the Clones Obi-Wan Kenobi that makes you happy, but if you do? You can probably save your money.

At a reasonable distance, the photoreal paint on the face looks a little better - but the eyes are a bit muddy. The hair is lighter, redder, and that's not a bad change as it seems truer to his on-screen appearance. He's a little pale, but it works with the hair. Overall, I'd say they did a good job overall with the head because the hair has fewer unpainted bits in flesh color. I can't nitpick it too much, but I assume a new head would be a stunner. This 2022 figure is as good as you're probably going to get out of a 2009 mold.

I'm not loving the body. It's still a little chunky, but the joints do move fairly well and the cloth "skirt" looks better. The belt is painted well, the tunic deco seems a bit more accurate, but the belt is sloppy - you can see my sample is tilted. There's belt paint missing behind the capsules on his belt. This is objectively worse than the previous releases - so if you want to slap this head on your old figure, maybe that's the best way to go. The cloth robes cover up most of these problems, though, so maybe you won't even notice. I did have higher hopes, I hate seeing new problems introduced on a reissue of an older action figure.

The robes are basically OK - nothing amazing, at this scale it's rare that the hood rests in a pleasing way. The communicator fits on the hand and belt just fine, but lacks definition on its face - it's just silver. The lightsaber is a bit of a disappointment, because silver elements around the hilt seem to be painted poorly, lacking in separation. The previous release had some silver elements around the emitter, here they're just sort of melting in the black plastic part. It's a definite step backward, but in his hands you might not even notice it.

For a reissue of a reissue, it's not exactly a premium product. Back in the 1980s (and 1990s) my friends and I noticed some toys lost paint applications as the reissues came down the road, or had inferior packaging, or generally started to cut corners - aside from the improved/different head paint, this one largely slides backward a bit. I'm happy it's available right now, because with the new Obi-Wan show starting people should be able to order something. It's also cheaper than the original releases, and this is probably the best of the three to get. You can probably steal a better lightsaber from another Kenobi figure, which is unfortunate. At this point I would assume fans would hope for the very best (as we're being charged for the very best), and this is just OK. I wouldn't be opposed to seeing Hasbro do an all-new take on this figure in this costume, mostly because I'd rather be impressed by a figure than to just pick it up and go "well, at least it's cheaper than buying the old one on the secondary market."