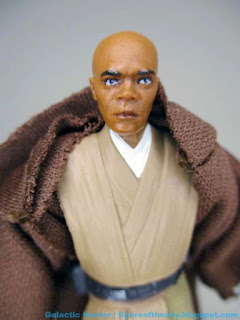 MACE WINDU Re-re-redux
The Vintage Collection 3 3/4-Inch Action Figure
Item No.: Asst. F4486 No. F4495
Manufacturer: Hasbro
Number: #35
Includes: Cloth robes, lightsaber, hilt
Action Feature: Hilt can't plug on belt
Retail: $13.99
Availability: April 2022
Appearances: Attack of the Clones
Bio: A grim Jedi Master, Mace Windu was the champion of the Jedi Order, with little tolerance for the failings of the Senate, the arguments of politicians, or the opinions of rebellious Jedi. (Taken from marketing copy. There is no bio.) 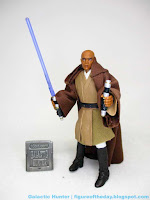 Commentary: This Mace Windu is a rerun of a rerun, the Jedi of Theseus, and really not too great compared to other new figures. I mean, it's not bad... but given that at its core it's a repaint of a retool of a figure from 2007? It's disappointing. Hasbro put a lot of effort refurbishing a core figure who started life in The 30th Anniversary Collection - the skirt and head were changed for The Vintage Collection in 2011. So this is a repaint of an 11 year old figure, that was at its core a 15 year old figure, which had some problems. It was also created for specialty/fan channel, meaning you won't find this series of rereleases in big box stores or their respective web sites. While I don't think this figure is as good of an improvement as it could be, newer fans who don't own a Mace Windu figure will find a lot to like. It's just the old-timers that will probably feel bad that they're buying the same tooling, again, complete with some of its problems.

The colors of the robes are better, the plastic outfit better matches the cloth under the skirt - that's good! It looks more like the reference photos than previous figures, which trended lighter. The legs are the swing-forward variety, still blocked by the vinyl skirt hanging down - that's bad. The skirt wasn't retooled, so the hole on the belt is too small for the lightsaber hilt's peg - so it won't go in there. You're got some stiff elbows, perfectly acceptable cloth brown robes, and hands which are a bit more flexible than some. That's an improvement - I don't know what it is, but getting accessories in those tiny hands tends to be difficult. 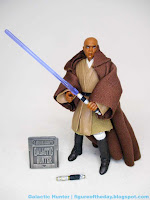 The 2011 head sculpt is here and it's arguably improved with the Photoreal paint... but it needs work. The eyebrows on my two samples are a little different, one seems off-center and both seem too thick to look like Samuel L. Jackson. His eyebrows are incredibly thin, especially in The Phantom Menace, where I had to double-check to verify he did indeed have them in the first place. The lips are colored lightly, and the shine on the yes looks wonderful. But I can't get beyond how much I dislike the very thick eyebrows. The skin tone seems OK, the expression is/was fine, and it is an improvement over what we had before [FOTD #1,751].

Since the 2011 figure was expensive (and Hasbro could save money bringing back the old tooling), this figure existing makes sense - fans want a 3 3/4-inch Mace Windu, and anything on a Vintage cardback tends to sell if it has adult fans. It's both the best we've had, and disappointing. 3 3/4-inch Jedi hips tend to be marred by bad articulation and plastic robes, as this is. The sleeves are kind of bulky and weird. The belt hilt peg doesn't work, which is pretty sad given it should be a pretty easy thing to take care of somehow. And the eyebrows... I hate the eyebrows. When a figure's reissue is at least partially predicated on improving it, this one is something of a lateral move. Is it better? Yeah. Is it as good as we're seeing when it comes to the paint on other recent heads of this size? No. Are the accessories too big still? Yeah. Could Hasbro have done well just to make us an all-new one even if it means waiting a few years? Probably. If you're on a budget, I'd pass on this one and hold your breath for another new one later. It might not ever come... but Mace is someone Hasbro likes to revisit on the regular. If you have no Mace Windu figures, get this one - it's as good as they come in this size! If you have most or all of them, consider how much you want to set fire to $14 to have something to look at, nod, and then put back in a display or in a box to store somewhere. Given how much of these lines are repaints, you might be better served saving the cash for the next big HasLab item instead, whatever it is.

Email ThisBlogThis!Share to TwitterShare to FacebookShare to Pinterest
Labels: Attack of the Clones, Jedi Knights, Mace Windu, Revenge of the Sith, TVC