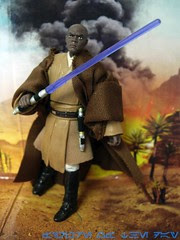 Commentary: One of my pet peeves is when Hasbro announces a "new" figure and it isn't. For example, at the 2011 New York Comic Con slide show, a Mace Windu figure from The Clone Wars was introduced as a "new" release despite having debuted in summer of 2010. This Mace Windu from the movies could have been introduced as a repackaged figure, and none would be the wiser. The core of the figure is recycled 2007 parts-- the bulk of the body was used for a Revenge of the Sith Mace Windu during the 30th Anniversary Collection, and this one is an incremental improvement over it. The lightsaber's purple is different, and his lower costume has been improved-- oh, and he has a new head sculpt. I cannot say that I believe the Samuel L. Jacksonness has been improved, but the ability of this figure to be posed is certainly better. The big difference comes from the belt-- there is now a place to hang his lightsaber, plus some cloth bits which help him to sit. The 2007 release had a hard plastic shell which basically resisted all attempts at forcing him to take a seat, which wasn't exactly fantastic.

The mold for the body has been used a few times, for other Mace Windu figures as well as other Jedi. If you're only going to get one Mace Windu, I would probably steer you to the animated figure-- but from the movies, this is your best overall bet right now. I'd like to see the hip articulation improved and I'd like to see if they can make the face just a little better, but it's still fine. I mean, it's obviously Mace Windu, but I think that first 1998 figure may have been the one to get the look-and-feel the best, even if it isn't the most authentic or the best articulated.

Collector's Notes: In early 2012, this figure could be found at certain US closeout stores for as little as $4-$5. At that price? You'd be foolish to pass on it. For $10, I can't say he's a worthy upgrade... but if you have no Mace Windus in your collection, $10 doesn't feel too bad.