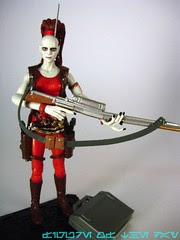 Bio: Aurra Sing is a Force-sensitive bounty hunter, mercenary and assassin. She is willing to work for anyone who can meet her price. Many aspiring hunters seek her out for training despite her reputation as a cold-hearted taskmaker. (Taken from the figure's packaging.)

Commentary: I am now quite happy Hasbro waited 10 years to really tackle The Phantom Menace again. Over the past decade we got a lot of figures again, and again, and again-- be it repacks, resculpts, or repaints that didn't do much to upgrade the original releases. But this new Aurra Sing and the whole massive launch of new figures is a breath of fresh-- or at the very least, less stale-- air. The last new movie Aurra Sing was nearly 12 years ago, and other versions of her have been inspired by the comics and TV shows. A new, super-cool movie edition has been held off for quite some time and now that we have it, I'm glad to say it's unquestionably superior to the Power of the Jedi release.

2000 Aurra had 5 points of articulation. This new one has 12 joints, plus a few of the minor quibbles of that older release have been fixed. Only one of her pistols were removable from the holsters before, and now both are. She had an awkward stance and couldn't aim her sniper rifle-- and now s he can. Her proportions are better, the sculpt is a little more bony, the coloring seems a little better, and oh yeah-- she has her antenna now! She didn't back in 2000. Her long fingers have black nails, there are all sorts of straps and buckles on her costume, and it's almost ridiculous how much better she is now. It's sort of like comparing a legit vintage Kenner figure to the Hasbro releases of the early 2000s-- the difference is remarkable. Heck, Aurra even seems nicer than a lot of other current Vintage 2012 releases-- it's surprising they didn't kick the assortment off with her!

I could quibble over minor details, but why bother? The creative higher torso joint is mostly hidden by her vest. Her hair has tons of painted beads in it. She's skinny. She is colored correctly. The only thing I can whine about is Hasbro hasn't yet perfected arm articulation to do some superbly cool sniper poses. I love the lightsaber "collector case" with the bonus weapons, which are molded in a silvery plastic rather than painted silver. It seems distinctive and different from other hilts, even though the molds look pretty familiar. As a fine example of what Hasbro can do in 2012, it's hard to find something more perfect than Aurra Sing. Short of giving her a vehicle, or a lightsaber of her own, I couldn't imagine improving her all that much. Hasbro should be proud. That's the good news. The bad news is that the bar for the new Darth Vader is set so high that I can't imagine being anything but let down, but overall this has been a good batch of figures so far this year.

Collector's Notes: This figure is scheduled for a release on a Vintage cardback if the NYCC 2011 presentation is any indication. Due to some items being shuffled, delayed, or flat-out not shipped in the USA I would be wary of any item you can buy today. Why wait? If you miss it, you'll be angry later. (Plus this version has a stand, the vintage version won't.)

Wave notes: I found this figure-- and several more-- in a large in-store display with dozens of these exclusive figures. I have also heard reports that they ship in cases of 12, but my store had tons. The wave has 12 figures. 4 of which are new, and are said to be appearing on Vintage cardbacks later this year: Aurra Sing, Naboo Pilot, Mawhonic, and Gungan Warrior. Two of these are said to be exclusive to this wave: Ric Olie and G8-R3. Six of these are repacks or being sold as Movie Heroes right now: Darth Maul, Qui-Gon Jinn, Obi-Wan Kenobi, Destroyer Droid, Yoda, and a Tusken Raider. Why all the repacks? The main characters statistically sell better, so it's in Walmart's best interest to have more Mauls to move than more Ric Olies.

The figure has 12 points of articulation.

This figure isn't as perfect as everyone says it it. Her legs are too short (she was played by a model with nice long legs) her bodysuit is too red and has no dirt/weathering(should be slightly more orange, with dirt). The likeness isn't quite right and one of the lightsaber hilts is slightly too long to fit in the case without being warped some. Also, her torso joint sticks out like a sore thumb, twisting it off center just looks terrible.

I think this is an awesome figure in terms of details, but if I wear to knit pick, it's like a cool "zombie" version as her eyes are so sunken and bony. I love it. I agree the costume is a bit too red and could use some dirt, but the torse cut is pretty inventive, give she was wearing a featureless unitard, it would have been terrible to have a straight waste cut.

But her bodysuit isn't featureless, it has that seam going straight down the middle, that isn't the main problem though. When you turn her torso, the sides of her body stick out unnaturally. It looks bad and doesn't really enhance her poseability much if at all. They should have given her a ball joint like Aayla Secura or something similar to the animated Aurra, or maybe just do away with the joint completely. The legs are the most distracting faults though, way too short with knobby inwardly pointing knees, overly thin shins/boots small feet and no ankle articulation. She's a step in the right direction, but far from definitive imo.

Also, I don't know what's people consider "creative" or "inventive" about the torso joint. It's just a normal cut joint after all.