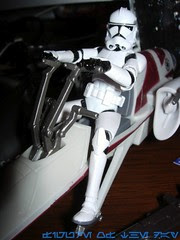 Bio: A clone trooper rides a BARC speeder during a scouting mission. The speeder is fast and highly maneuverable, making it ideal for almost any environment, from thickly forested planets to parched desert worlds. The trooper carries a rocket launcher in case he encounters any Separatist forces. (Taken from the figure's packaging.)

Commentary: This is an interesting one, from the perspective of a toy junkie. The Clone Trooper is, in some respects, a new figure. Basically it takes the 2011 Vintage Clone Trooper (from Attack of the Clones) and gives it a Revenge of the Sith helmet. This means he has the bend-and-swivel hands, ball-jointed hips, and all that stuff. A better helmet would have been great, but as it is it's pretty good. The sculpt is fantastic for riding bikes like this one, or holding his weapons. Hasbro probably also realized that tying it in with the newer-style Clones on The Clone Wars this year might make it seem fresher than the Attack of the Clones-inspired troopers we've seen so many of since 2008.

So the sculpt is good-- I was a big fan of the 2011 Clone body, even if it isn't perfect for the later Clone armor, it's really good. What amazed me the most about this set was that Hasbro actually tried to make good on the higher price by giving you more stuff. I expected 1 blaster. I got 4, plus a firing rocket launcher. I can live with that. Were the clone released on a single card, he'd be $10 these days. His guns have painted deco on them, which is a nice touch, plus it adds a little more value to an otherwise samey package-- I mean, how many BARC Speeders do we all have by now? 10? More? Tossing in a newer-style figure and extra guns basically make it a desirable purchase, effectively transforming it into an accessory pack of sorts. If you've lost your guns for your other Clone figures, buying this one can right that mistake. To me, that's incentive enough to pick this up-- either for myself, or as a gift. It's different enough to be interesting, although I do think Hasbro is going a little too far with the repackaged vehicles. I understand wanting to rerelease the same ship time and again, but the price increases with it starts to sting. I do appreciate the added accessories though, even if I don't need them it's nice we got something other than a creeping sense of shame that we bought the same bike again.

Collector's Notes: Of the first 4 vehicles in this size class to debut this year, this was my favorite and seems to be the best-seller shortly after launch. Since the figure is distinctive, this makes sense. The others are less enticing, and frankly from the new releases it seems customers are more interested in The Clone Wars than the Phantom Menace stuff. Am I the only one who wouldn't mind seeing the line shift its focus to the TV show (and related things) completely?

Clone Wars or Movie related, I just wish the lines would shift away from reruns and repaints.
The best thing about Clone Wars was that it meant new characters, but based on the previews of what's to come it looks like nobody (or at least very few) new for either line.

More Clone Wars/TV related product would be awesome. Every week I'm seeing more characters I want as figures, but am unlikely to ever see based on the shrinking allocation made for them.

I'm fine with movie inspired characters if they are NEW toys. I dont want rereleases repaints or even remolds of existing characters.