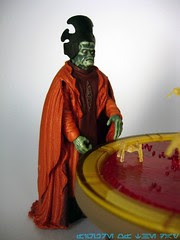 Bio: In a conference room on Geonosis, leaders of the Confederacy of Independent Systems watch Republic and Separatist forces engage in what will become the first batle of the Clone Wars. unscrupulous opportunists who will do anything that will benefit them financially, they ally with Count Dooku to advance their own interests. (Taken from the figure's packaging.)

Commentary: I like Nute Gunray. Not as much as I like Admiral Ackbar, but it's a neat character and an easy target for making jokes-- specifically, doing Taco Bell ads in his voice. Trust me, good times. Anyway, this figure-- which I believe is the most recent version of the character in action figure form despite being about 9 years old-- is actually a redressed version of the 1999 figure. (He even has a 1998 copyright date on his foot.) The head and coat is new-- the body and arms are old. I'm willing to bet most fans didn't notice, in part because the set comes with a swell half of a table and I would assume everybody's first reaction to buying this set would be to assemble the table and ooh and ahh over it. It's a nice table, with clear red surrounded by some yellow, covered in little yellow holographic vehicles. It's a nice little decoration.

Nute Gunray has only 3 meaningful points of articulation, with the neck and shoulders getting a decent range of movement. His hips and waist are articulated, but due to the robes they're really quite worthless. Thankfully the sculpt is good-- his head looks a lot like the mask in the movie, and the hat is a nice touch too. His face is quite colorful, with shiny eyes giving him a smidgen more soul than your average alien action figure. The robe sculpting is sharp, with lots of folds and detail-- it actually looks significantly better than the figure in the robes, because of the time difference in their creation.

Hasbro could do a better version of the Trade Viceroy, but probably won't-- which is a shame, because Nute makes for a nice figure. As this is the best Nute to date, you may as well buy it--if Hasbro doesn't announce a new one at Toy Fair, I have a feeling that this character's window may have permanently shut.

Collector's Notes: The Geonosian War Room and Jedi High Council sets were highly anticipated, and these first 4 "Saga Scenes" were dumped at Kay-Bee for half price. You should be able to get this set for $10 or so-- the set-- not just one figure. I give it a strong recommendation for ten bucks.