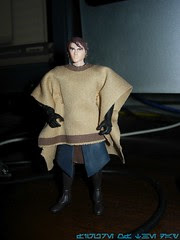 Bio: Anakin wears a rough poncho to hide his identity as a Jedi from the Trandoshan trader. (Taken from the figure's packaging.)

Commentary: I love this set, but Anakin Skywalker isn't necessarily the selling point. Gha Nachkt was amazingly cool, but Anakin is basically more of the same. Basically, it's the 2008 figure with a poncho-- it's cloth, it has a nice stripe, and it's what makes this a new figure. It's not quite "New Hat Malibu Stacy" but... well, it sort of is. Hasbro has always been skilled at making a gift set where there's one cool, unquestionably new figure plus three or so others which you could probably take or leave. Anakin is one of those-- I like that it exists, but it's not like the poncho is a fantastic extra, it's just pretty much OK. If you don't have any Anakin figures, I'd suggest just getting this set because it's a fine way to get him, plus a few others, at an OK price.

Collector's Notes: While extremely hard to get when it came out, the set doesn't seem to be selling for a big markup on eBay. Few are selling at all due to the high starting bids, but you should be able to get it at or under $30. I would say this set's parts are basically worth $30ish, but mostly because I'm dumb enough to think $20-$25 would be a worthy price for the super-cool Gha Nachkt.

I'll admit it, and I don't care who knows: The poncho on Anakin (and Ahsoka) was a *big* selling point for me. Yes, I primarily bought the BP for Gha Nachkt (who didn't?), but I loved those ponchos. Don't know why. I don't even *own* a poncho. I'll tell you something else: I absolutely *had* to own Qui-Gon Jinn in his Mos Espa poncho disguise. Maybe I have a Star Wars figure "poncho fetish," if there is such a thing. Well ... I guess there is now.