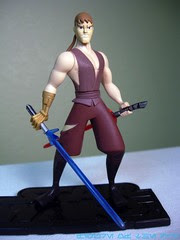 Commentary: Despite not being from Season 3 of the original Clone Wars animated program, this Anakin Skywalker was put in stores around the same time that it aired. While I previously did not feature this line, popular demand from a poll in 2011 said you wanted to read about these-- so here you go. This Anakin was a collector's figure, having less in common with action figures than with statues. Packaged with no twist ties or rubber bands, the card art was slick, clean, and gorgeous. The back had animation art from the episode as well as pencil sketches, with lots of white and big bold colors. As packaging goes, this may be some of Hasbro's most graphically pleasing work, despite never having been hailed as a fan-favorite sub-line. This line of animated figures came out long after the announcement of "realistic" Clone Wars toys, and were designed with collectors in mind. (That means they're not going to fit in vehicles.)

Modeled after his fight in the rain with Asajj Ventress, this action figure is wet in appearance with an angry face and matted-down hair. He is well-muscled, visibly in touch with his dark side, and features a mere 5 strategically placed joints. Each shoulder is poseable, as is his robotic wrist, his neck, and his waist-- other than that, he's a statue. I liked this line because it provided maquette-like collectibles at action figure prices, allowing limited articulation to give the character some personality without burdening the design with cuts all over the place. It looks spectacular and was the first version of Anakin in this costume to be made as an action figure, with a realistic (and dorky-looking) version coming later in 2005.

The figure reminds me a lot of Chuck Jones' art, for some reason, so I dig it. With big sparks coming out of the lightsaber hilts, bold poses, and lots of personality sculpted into the face, these are unlike any other figures in the Hasbro canon and there are only about 14 carded figures and an additional 6 figures exclusive to 3-packs, counting all major variants. It's a tiny line you may wish to collect as it doesn't take up a lot of room.

Collector's Notes: The figure was sold single-carded only, and was available for a short window of time. (The initial two series were Target exclusives-- this wave was the first batch of new figures to be sold everywhere.) Due to the coming of Revenge of the Sith, the line came and went quickly. Today, the figure sells anywhere from $0.01 (seriously, plus shipping, it closed for this) to as high as $10 on the secondary market. I would suggest seeing if you can buy the entire line-- or close to it-- as a cheaply priced collection. It is extremely unlikely that Hasbro will ever return to this style of product.

Other Notes: Due to some communication errors, I was supposed to be mailed one of these in 2005 and it never came. I didn't actually get this figure until late 2011, over 6 1/2 years after its release. Interestingly, I found it on eBay in a lot with the other figures from the line I skipped plus several extras I didn't need, and the price of the entire lot was significantly lower than buying the 3 figures I needed individually. So as you can see, I followed my own advice in Q&A which you people keep calling me out for offering, and it actually paid off. Sometimes, yes, it DOES pay to wait a few years and buy a whole collection rather than 2-4 individual figures.