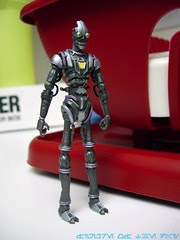 Bio: This prototype holodroid has been Galen Marek's companion for many years. PROXY is a one-of-a-kind droid that uses advanced hologram technology and built-in servos to alter his appearance, becoming virtually anyone. (Taken from the figure's packaging.)

Commentary: Oh PROXY, you were one of the more memorable characters in The Force Unleashed. As a plot device, this character seemed to have more personality than a lot of his human counterparts, given a hard-working personality and the kind of can-do attitude about attacking your employer rarely seen outside a Pink Panther movie. An entirely new mold, the figure is super-articulated, super-thin, and a really nice recreation of the digital character. Leg articulation isn't perfect, but when it comes to exclusives like this, or weird Expanded Universe designs, they rarely are.

The skeletal robot basically sweats mist and projects holographic images on it, giving him the illusion of being other people. I don't think the concept-as-technology holds a lot of water, as it were, but it was fun to see him take on random character skins as "training programs" for Starkiller. If you get in real close, you can see wires, pistons, and other cables holding him together making him look like a part of the typical "used" Star Wars universe while technically being one of the highest-tech pieces of military equipment available to the Empire. Heck, even Darth Vader's suit looked like an Apple product despite being cobbled together after an accident. I mean, I assume that sort of attire isn't off-the-rack, but since I shop mostly out of dumpsters I am not up on galactic couture.

The deco here is good, there's a lot of grey but silver, purple, and yellow break it up nicely. A little more purple around the elbows and slightly darker "metal" parts would really sell the look, as the colors are a little muted compared to the rich blacks and vibrant purple seen on the in-game character model. Should Hasbro ever decide to rerelease and repaint, this figure could go from great-- and it is great-- to superb just by selecting slightly different materials. If you stumble on this set in your journeys, I do suggest buying it-- the Mandalorian Starkiller, PROXY, and redesigned Jumptrooper alone made this a worthwhile purchase. (The clear Stormtrooper less so... I'm terrified about keeping it from discoloring.)

Collector's Notes: The set came out during a real lull after the end of red-and-white Legacy and before Vintage launched, and also sat around for a bit. But because this is a good figure, the secondary market picked up on him and just this one robot will cost you about $15-$25. And the whole set was $30 when you skipped it-- see what you get for passing up a good deal? You get screwed. The boxed set is also a little more expensive than its issue price, but it appears to be cheaper than buying the figures separately. While I personally dislike seeing figures shoot up on the secondary market, it's nice to see that things fans asked for sometimes command a premium-- I'd rather see something good gain value than something "rare." And now that Hasbro is aware how much this guy costs, I'd say it's high time to rerelease it wouldn't you?