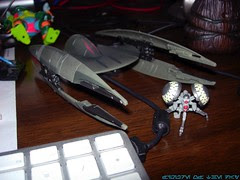 Bio: Vulture droid starfighters are highly maneuverable and effective in battle. When not in flight, they can change into a walking mode allowing them to be used in surface patrols. (Taken from the figure's cardback.)

Commentary: This Vulture Droid figure was one of few figures I was unable to find at retail during the first go-round. It started showing up, but why? Why would Hasbro take a mold from one movie and paint it up as the version from six years prior out of the blue? I have no idea, and until a couple of weeks ago it, too, sat unopened in a box. Now that we're on the verge of a Phantom Menace reboot, it's neat to look at this older mold and say that, yes, it still looks pretty good. The detail inside the wings is quite striking, and there are numerous sculpted panels and cannons. It's smaller than the "super" mold we'll see returning any day now, but at 7-inches from tip to tip of his wings, it ain't bad.

This is a repaint, the previous version had blue stripes and bright green eyes. This one is mostly a greenish brown, with some metallic bits and bright red eyes. The size is small enough to fit in kid hands without feeling puny, although the only moving parts are its firing rocket and the two articulated wings. A pop-up "head" would have made this a slam-dunk. Still, as deco goes this as (at this time, anyway) my favorite toy Vulture Droid in terms of overall realism. The Revenge of the Sith blue one is cool because of its freaky colors, but this one just seems right to menace the Naboo on behalf of the Trade Federation.

As a bonus it comes with a small, non-articulated Buzz Droid. It's slightly different than the mold with the Tri-Fighter, and has a little bit of paint bringing it to life. There's some yellow on the shell of the robot, plus red "eyes. You'll also notice a grey plastic body and a painted dark gunmetal grey on the arms and shell, too. For ten bucks it's a nice item, and I'm happy that after having hunted it down for five years-- and waited for the price to be right-- I now finally have one.

Collector's Notes: I bought this figure off eBay for about ten bucks roughly a year ago, which helped to cap my modern movie collection off nicely. I saw a few at toy shows over the years but they were always $20-$25, or as I like to say, on the "kindly choke on it" price range. It's not common on eBay, but it's also not really worth anything.

Email ThisBlogThis!Share to TwitterShare to FacebookShare to Pinterest
Labels: Droids, Revenge of the Sith, ROTS, Separatists, The Phantom Menace, Vehicles