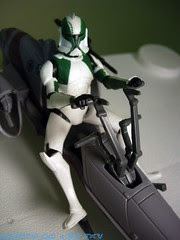 Bio: Clone trooper Buzz rides a BARC speeder bike on Geonosis. He is on a scouting mission for the Republic forces, as they plan their next move against the Separatist army. With its laser cannons, speed, and mobility, the bike gives Buzz the ability to defend himself against an enemy attack. (Taken from the figure's packaging.)

Commentary: The set with Clone Trooper Buzz is basically just a redeco of the Clone Trooper Jesse with BARC Speeder Bike set from about a year back. This is perfectly fine-- Jesse is a good mold, and the speeder with wheels is more fun than the ones without wheels. But anyway, let's talk about Buzz, who's full name is "Clone Trooper Buzz" most likely for the same reasons we got toys whose proper names were "Autobot Jazz" or "Marvel's Firestar." Because of how trademarks and whatnot go, sometimes a word by itself isn't strong enough-- so you add a prefix. Also, sometimes a character name is taken by another product, or another company, and in this case it's a safe bet "Buzz" needed more so it wouldn't be confused with one Buzz Lightyear. (Similarly, Hasbro made the Jedi Knight Kit Fisto around the same time as Mattel tried to remake an old He-Man character named Fisto, but at the time they just renamed him to Battle Fist.)

Lacking the rotary blaster cannon he had on the show, Buzz now sports a bike which is, arguably, more fun to play with. (Besides, you probably have a spare rotary cannon by now.) The figure is based on the Jesse body, which itself is based on the Stone body. It's notable for having swiveling wrists, no ankle joints, and armor more accurately sculpted to fit the look of the show. (The elbows were wrong on most 2008-2009 figures.) With the addition of ball jointed hips for better use of his vehicle, the sculpt is almost perfect-- the belt looks funky and is a little ill-fitting. I originally had thought the belt was upside-down, but this is not the case-- it's just not quite a perfect fit.

Other than that, it's a pretty neat design. I don't know if the name "Buzz" has any significance, but he does have a swell stitching on his helmet and some markings on his shoulder of which I do not know the meaning-- if any. The green paint is a little sloppy in parts, particularly some smudges on his backside and on the top of his helmet. At $17 with a vehicle, odds are you won't want the vehicle. But the figure was enough to get me to pull the trigger just because he did look significantly different from other green clones in my toy box.

Collector's Notes: The set was delayed, apparently by quite a bit-- the date stamp on the box indicates it was made in March of 2011. The item was announced in July of 2011, when Hasbro confirmed an August release date. It hit in December, more or less out of the blue after months of silence.