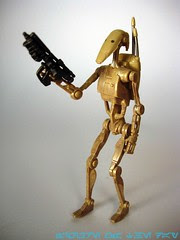 Commentary: I mistakenly thought this Battle Droid was the same mold from a previous release-- it isn't. Brand new! New gun, new backpack (sits higher on the back than I expected), and yes, sculpted eyes. You might remember the last new version-- the Geonosis Arena sculpt from 2009-- had painted eyes, and they were painted really badly. This one? Pretty much perfect. The shoulders and hips don't have the same lateral range as the last one, but everything else is fantastic. I haven't had it long enough to know what gravity-related problems he'll have standing up over time, but it's an otherwise fantastic figure. Functionally, it's the same as the previous release except it folds up a little bit nicer.

He can collapse in a little ball. He has jointed ankles. He has a nicely detailed paint job. The head sculpt has never been better. And why don't I think it's fantastic? Well, the backpack seems to sit too high on the back, and it's way too clean. There is no way to hold a gun with both hands. The backpack no longer has a hole to carry his gun, which has been on nearly every Battle Droid since 1999. I don't get why they left it out, it was one of my favorite features. It's a big improvement as the sculpt goes, and the antenna makes me thing we'll see OOM-9 as a repaint some day. We'll see, I guess. It's worth picking up, but I wouldn't suggest army-building it at the price. Hasbro has said army builders have been less popular lately, I say it's because $10 a pop is too high to build a squad. $10 is a one-of-each price. When you get right down to it, the functionality of this figure is not greatly improved from the 1999 versions, although its look and feel will make you wish Hasbro had a cheaper way to build an army of these guys in a hurry.

Collector's Notes: This one just came out. There's a street date on it, but I saw them in a bunch of Wal-Marts a couple of weeks ago, and a few Targets over the weekend I believe. Toys R Us put them up on the web early, and after that I stopped keeping track. Long story short: it might be at a store near you. I like the packaging and cardback-- the new back of the card, unlike every Vintage figure since 2004, doesn't look boring. It also has a Phantom Menace logo, which-- if you're like me-- is exciting so you can have one "vintage" carded figure from every movie on display and then move on.