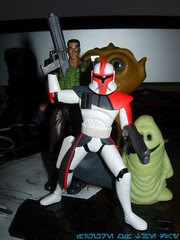 Commentary: Fans are still asking for the perfect movie-style ARC Trooper based on the original animation designs from the Clone Wars cartoon series of old, and we've had a few close ones. Of course, so many of us forget there was an animated figure based on this series in 2005, and it-- plus the rare 2010 CG-based release-- are both excellent takes on this fan favorite. Everybody loves Fordo, the red ARC Trooper commander. If anyone says otherwise they are lying, please punch them in the incisors for me.

For various reasons, I did not have this figure in my collection until late 2011. As with the other figures in the line, it's more of a collectible figure or statue than a plastic plaything. The ARC Trooper has four points of articulation, including a ball-jointed head which is fantastic for display purposes. His bright red armor markings come through crystal-clear, plus my favorite thing about the figure is his sculpt. Hasbro did a really good job ensuring that he can signal with his right hand and, were you so inclined, it can also hold his second blaster. Both blasters can fit in his holsters, but just barely-- it's a tight squeeze.

The detail closely matches the series, save for one thing: the animation model has tons of black lines detailing armor, bringing it to life as a delightful drawing. The action figure has very little of this, and I'd be curious to see if a fan customized this figure with a Gundam marker bringing out those panel lines and seeing just how much better (or worse) it looks. While the helmet isn't perfect, it's quite good and the figure makes for an excellent, low-cost desk decoration.

Collector's Notes: The figure has sold for as little as 99 cents on eBay, and was also sold in a 3-pack as well as individually. I would suggest buying it in a lot with other figures from this animated line to keep your costs down, plus they're all neat enough to warrant your wanting the entire collection. It's a small line, and they're all unusually timeless for Hasbro figures-- they look just as good today as they did in 2005, although I still believe another nickel spent on deco would make them even better. They are worth your while. Buy them.

These original Clone Wars microseries figures are still awesome. Hasbro did this subline right and made it very distinct and not too big.

Love this figure. The Tartakovsky series is the best!

I love the Tartakovsky series, it's what got me back into collecting after the original vintage line. This figure, though as Adam stated is more of a display piece/statue is one of my all time favorites of any line (and I happen to hate the modern clone wars line). Truly a work of art!