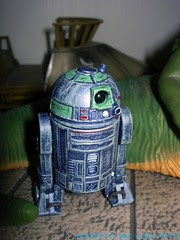 Bio: Watto sells used droids and mechanical parts in his shop on Tatooine. One of the droids for sale is R2-T0. (Taken from the figure's packaging.)

Commentary: Arguably the best of the Wal-Mart Droid Factory sets in terms of deco, Watto and R3-T0 bring you characters you didn't think you wanted. While not a perfect match to the movie, it's not like you could pick him out easily and it looks like the paint job is extremely good all the same. In the movie stills, the droid was shown with arms and gadgets popping out-- but this sort of thing costs money, so Hasbro repainted the R4-G9 mold and made a perfectly good robot out of existing parts. This is the mold with the retractable third leg and rolling wheels, and it's the basis for most of the best R2-style droids since 2005. His head turns, his legs move, and his feet are articulated. It's a good design.

The main reason to buy this figure is the astonishingly good paint job. Again, it doesn't perfectly match the movie (which has even more dirt) but it's an amazing figure in its own right. If Hasbro came to you and said "We made this up, but we think collectors would like it" I think you'd agree. Mostly a dirty blue, R2-T0 has green panels, some red markings, a ridiculous amount of scrapes, and a big black shiny eye-- just the way it should be. While Hasbro has done some cute R2 repaints over the years, this is the one that-- with paint alone-- knocked my socks off. Sure, R2-KT is cute. Yes, I thought Goldie was nice as an evil robot goes. But for my money there's nothing more amazing than R2-T0 in terms of "so did that toy get hit by a bus?"-ness. The companion Watto figure is, at this time, notable as the finest Watto to date so you probably won't be sorry if you get this 2-pack.

Collector's Notes: The set is worth about $10 on the secondary market, if not less. You might get an even better deal by picking up all six droid factory sets so you can also build C-3PX.