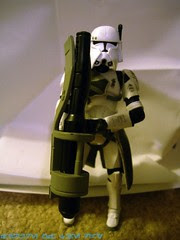 Commentary: Hasbro wisely realized just how much mileage they could get out of their clone molds, and the Heavy Trooper was what Bacara got. It's the same sculpt as the 2005 figure, complete with the squeeze-the-legs-to-aim-the-gun action. (It's a nice action.) The big deal here is the new color and the gun, which for Clone fanatics is more than enough reason to shell out the cash to get one. The figure is now painted in a gray color rather than maroon (or camo, or blue) and sports some "battle damage" scrapes and markings. There are some silver highlights, but he's still the "can't really sit" figure from 2005, more or less.

The gun-- so far exclusive to this figure and this set-- is the high point here. The long black rocket is removable from the launcher, but does not fire-- this is unusual for a Hasbro product, as spring-loaded whatevers tend to find their way into most of the toys where it would be appropriate. Why they neglected to include on here is beyond me-- I would assume it might have to do with a reduced lead time to make the set, but it's hard to know for certain. (After all, we can't ask Hasbro questions about all 2,000 or whatever figures.) This figure looks good and is basically acceptable as a plaything, but it's more of a "pose" figure than an "action" figure. It's kind of funny to see that it has a mechanized feature to aim his rocket launcher... but the launcher does not fire.

Collector's Notes: The set was repackaged in the blue-and-white 2008 "Legacy" colors, making these figures not terrible tough to locate. The price varies based on a variety of factors, but has sold recently for as little as $26. Plus a lot of shipping.

My day doesn't truly end until I read this column. Just sayin... Props.