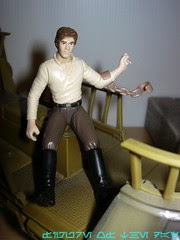 Bio: He escapes being fed to the Sarlacc when his friends come to his resuce. (Taken from the figure's packaging.)

Commentary: I'm not quite sure why Hasbro opted to put this "new" Han Solo out in 2004. Made of new and old parts, this figure creates an unfrozen Captain Solo out of elements of the 1999 Cantina version and the 2000/2001 Bespin Han Solo figure. It kept some of the good parts, but not all-- unsurprisingly, the new right leg has no holster, but it also has no knee joints. The figure doesn't sport ball-jointed shoulders either so when you get right down to it, at least from the perspective of articulation, this figure took the worst elements of those and put them together.

The figure itself looks OK, an improvement over the brow-furrowed unfrozen Han of 1999 and the bulky one from 1996. Han Solo in Carbonite is one of those few figures that could really stand for a complete update, although those just wanted a solid unfrozen Han may be best served by the 2006 carded release, or the 2008 Sandstorm version. This version is for collectors only, if you have to have every last unique mold, this is one you just have to buy. Seven points of articulation weren't very exciting in 2004, and they're not very exciting today. The coloring is good, but the shirt is wrong and the head sculpt feels off. Harrison Ford's head seems like a tough one to capture in this scale, so you might just want to give this one a pass.

Collector's Notes: The set itself is rather neat-- you get Klaatu, Barada, and Nikto from the then-hard-to-find Cinema Scene set featuring Jabba's thugs, although now they have black weapons. (Variant!) The other big accessory in this set is the Sail Barge Cannon, originally sold with a Deluxe Slave Leia in 2001. It's a nice accessory, and from the look of things it'll be the largest chunk of the barge Hasbro ever makes. I would suggest getting the gun, but to date there is no way to do so without also buying some of those older figures which you may no longer want or need. Since this set is basically worthless at under $10, or much less, I think it wouldn't kill you to get it just to toss out the figures and keep the gun. (But don't do that.)