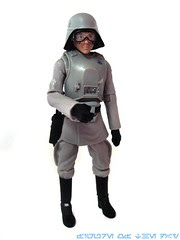 Bio: The vintage line does not have character-specific bios. It just reminds you that these are very old figures. In the case of this figure, you get a summary that tells you nothing of the character along with a photo and a caption saying the original figure card front was used from 1980-1982. Whoopee.

Commentary: A mix of new and old parts, this AT-AT Commander is a very good and very unnecessary figure. So why make it? Hasbro had a giant AT-AT hit stores around the same time as this figure, and the last General Veers was sold in 2006-- so for the newcomers, they're going to want a commander for the ship. As an added bonus, it checks off an update for a classic Kenner figure of the same name, so woo-hoo. The bad news is that it was a bit of a slow seller and was still available late last year. Heck, it might still be available now.

He used a mix of super-articulated parts from Janek "Tank" Sunber and Captian Needa, resulting in a figure that's technically superior to Veers from 2006. (Veers was also friggin' tall.) If you must have a commander with plenty of joints, this is the one to get. The detail is good, and the head sculpt doesn't look like anyone in particular. Were it not for the armor under his belt, you could even use this guy as a spare generic Imperial Officer of some sort!

The figure has no problem standing around in the commander's area in the big AT-AT and it looks pretty good too. Getting the goggles and helmet just right can be a bit of a chore, and I'm a little concerned the goggles will stretch or break over time if you aren't careful. The helmet is also a little bulky, but I'm not sure if they could make a decent one in a much smaller size-- although Veers did look pretty good, didn't he? Hmmm. Well, I guess with that in mind, if you have Veers be happy. If you need more, get an AT-AT Commander. Ultimately you don't need two of a similar character, but has that ever stopped you before? Oh, and his holster is pretty good-- it feels better than Veers' to me in terms of functionality.

Collector's Notes: This figure came out as part of the long-suffering first wave of 2010 Vintage figures, and hung around for a while. The wave was notable in that it proved how the market works when collector apathy sets in-- Darth Vader and Boba Fett repacks will sell quickly, followed by core characters like Han, Leia, and Luke... with troopers or lesser bounty hunters slowly selling out later. A bad wave 1 can disrupt distribution for an entire assortment for months or even years to come, and well, this one did. So if you see one out there, curse him for me.

Email ThisBlogThis!Share to TwitterShare to FacebookShare to Pinterest
Labels: Empire, The Empire Strikes Back, TVC

This was a slow seller? Not in my neck of the woods (SE Massachusetts). I NEVER saw him on the pegs, and ended up having to buy him online after I got my AT-AT (can't have all those underlings running about with no one to boss 'em around!).

For reals? I can still find this figure (and a few other wave 1 2010 TVC figures) around here.

Wow, that is an anomaly. I could drive to the Wally World closest to my house right now and buy three of them (Along with 4-LOM, Dengar and Cloud Car Pilot). '3PO was the only figure from that wave that was tricky for me to find, not unlike his VOTC counterpart back in '04.

I think it depends on just how saturated certain areas were with vintage figures. I can't imagine all stores ordered the exact same number of wave 1 cases. Wave 1 wasnt a huge issue in my area (northern PA) and this figure in particular sold pretty well. 4-Lom and, to a lesser extent Dengar were the problematic figures.