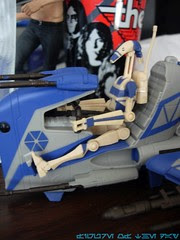 Bio: Battle droids operate Separatist droid speeders to attack the clone trooper army. The speeders may be lean in size, but they have plenty of built-in laser cannons to unleash on the troopers. The wings move to enhance its maneuverability during combat. (Taken from the figure's product info page on Hasbro.com.)

Commentary: You've no doubt got too many Battle Droid figures, but this one is different-- Hasbro revisited the sculpt and added some stuff to it. For example, it has knee joints, even though it doesn't need them for this vehicle. His forearms are longer, the torso no longer has a waist joint, and the head is redesigned to look more like the show. It's Battle Droid 2.0, which seems to be about as different and refined as the new Clone Trooper body (first used with Stone) was to the original 2008 form. It's an upgrade, mostly, and the unique blue markings are pretty slick if not necessarily something you need to add to your collection. While not a match, the look reminds me of R2-D2's Battle Droid squad from the Citadel episodes.

My main beef with the new version is the backpack-- the peg is a little tough to push in, and it's extremely easy to knock loose. I'm not even sure how that's possible, but it is. The ball-jointed legs and shoulders had more range in the previous version of the mold, which actually might have been better for sitting on this vehicle-- he does fit just fine, though. The vehicle itself is a nifty little speeder inspired by the mini rigs of old, with moving wings and a dropping bomb. Its main flaw are two cannons right on top of the vehicle which pop off if you look at it funny. Don't touch them, they will shed. Hasbro could have (and should have) used another form of fastener, like the T-shaped peg used on the 1995 Boba Fett or the small pegs used on other vehicles like the Y-Wing Scout Bomber or Republic Scout Speeder. These have a longer slot with a weird fin-shaped peg, and it just doesn't work well. You may need to glue them in place.

Overall, I like the droid-- it looks better and with its knees, it's a better plaything in many respects if they just fix the backpack to stay on better. It isn't perfect, but it seems like very time a troop mold is revised you gain a few things and lose a few others. I'd say get it, but be prepared with some glue if you don't like how it behaves.

Collector's Notes: To date, I believe this is the only Battle Droid to use this specific mold-- correct me if I forgot one, Hasbro has been stingy with new Battle Droids of any kind and they all seem based on the 2008 sculpt. This set is somewhat common (or was late last year), so you might find it easily on your travels. Or you might not. Heck if I know what's sitting where you live.