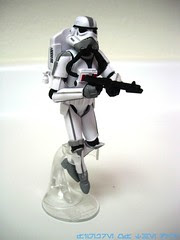 Commentary: While the Darth Vader from this set has a new accessory, the only real new figure is the SKy Trooper and Hasbro was kind enough to throw two in the box. The idea is that you get that Vintage 2004 Stormtrooper mold decked out with more space gear. "Like the Space Trooper I already bought?" you ask? Sort of. This time it has a new, slightly more awkward jet pack and new deco, and the new deco is the reason to buy him. It's both sort of Imperial Chic with grey stripes, maintaining the style we've seen on our clones more since 2005. The pattern feels vintage 1980s, which, for me, works quite well. He includes a clone blaster for some reason, and has the typical 14 points of articulation.

If you like the look of the figure, you're probably going to dig him. The only thing that could make him better would be a flight stand, because what's the point of a jet pack trooper who just stands around? Cody gets an exception, but for the rest? I demand flight!

Collector's Notes: This set is most likely available at a Disney theme park (not) near you right now. For $40 it's not a good deal, and it sells for $40-$60 on eBay. My pal Shannon is kind enough to act as my mule on these items, and for that I am happy-- but I wouldn't necessarily drop an extra $30 to get this set on the secondary market. Basically, you're paying $40 for a Boba Fett you probably have, a Darth Vader you also probably have, and the two Sky Troopers-- and unless you want two, it's kind of expensive.

What stand are you using? It looks pretty neat and I was wondering where it came from.

It's actually from the companion boxed set-- the one with the WA-7 repaint and the luggage attendant.