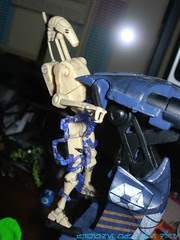 Commentary: This Battle Droid figure was one of many cranked out in 2008 with the launch of the movie and TV show. It's a little off-model-- the head in particular-- but it was resculpted a little bit to better fit the STAP. (I appreciate this, as there's little I hate more than a pilot that can't fit in its ship.) This figure has redesigned arms, the forearms are rotated slightly so he can grip the controls of his vehicle. The legs are spread to fit on the pedals, plus he has a backpack like all Battle Droids tend to. His legs have a lot of blast marks, and he seems dirtier than most Battle Droids out there too. It's a different-- although perhaps not significantly so-- take on the trooper. If I could buy one or two more easily, without the STAPs, I probably would.

While he doesn't include a blaster, he does have some bright blue energy bolts which look like he just got shot. Personally I think painted versions of this kind of damage looks better, but it's still cool and a welcome addition to your unnecessarily large armies.

The STAP itself is also quite cool, with Separatist logos, blue markings, some gold coloring, and tons of filth. If you get in close, you can see some amazing scrapes and grime on this thing. It's almost a shame that Hasbro hasn't applied this level of detail to all of its ships. They do a good job, but this one seems exceptionally nice. Perhaps they put the toy money into the deco? The set includes 2 STAPs (old mold from 1998), plus retooled versions of Anakin and the Battle Droid-- so it couldn't have been much to develop this one.

Collector's Notes: As with most recent toys, this set remains somewhat cheap. You should be able to get one for $15-$20.