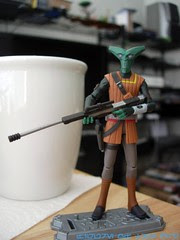 Bio: The Arcona drill sergeant El-Les trains clone troopers on Kamino. His extensive experience as a bounty hunter makes him well-suited to teach battle skills to the cadets. Always armed, the blasters El-Les carries are the models favored by many bounty hunters. The long-distance marksman rifle is designed for pinpioint targeting accuracy. His compact pistol is easy to conceal, so that he does not reveal his purpose as he closes in on his quarry. (Taken form the figure's packaging.)

Commentary: As a companion to the more vocal (and arguably interesting) Sgt. Bric mail-in figure, El-Les is an Arcona bounty hunter/clone teacher appearing on only one episode of The Clone Wars so far. Minus a lack of ankle joints, El-Les is a super-articulated figure with some pretty decent sculpted detail. He's lanky, he has ribbed armor, and there's a fair amount of color like a yellow marking around his neck and a communicator on his wrist. Heck, most Anakin figures don't even have one of those yet! For a character that stands around offering exposition, he got a pretty good figure. The Lucas animation people didn't make him a particularly tough bounty hunter, resulting in a character that seems too forgiving and maybe even a little weak when put against the irate Bric. Heck, even next to Ahsoka, El-Les doesn't really seem like a heavy-hitter.

The sculpting and deco of the figure are great. The head has just enough detail, the toy matches the animation model to my liking, and I appreciate that his rifle has painted detail. Even if it is, you know, completely unnecessary. I'm actually a little surprised they opted to not include a spring-loaded weapon with this guy to appeal to the kids, but I do have a hard time reconciling Hasbro's "we're making this for kids" line with the product they release. There's a lot to like here, but most of it is going to come from just how interested you are in this guy as a character, or at least as an accessory for your clones. He doesn't disappoint, so grab one.

Collector's Notes: Unlike most non-major-character characters, Hasbro kept shipping this guy for a while-- so his being at your store could be a sign that you just missed Wave 10 right now.