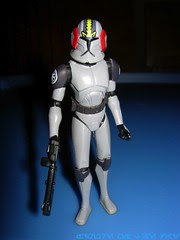 Bio: A seasoned veteran of many covert military operations, the stealth operations clone trooper shows a rookie trooper how to survive the dangers of a stealth combat mission - particularly one led by Anakin Skywalker. A routine relief operation turns into an all-out fight with a ruthless enemy. The battle-hardened trooper is tough on recruits, to make them ready for unexpected attacks and able to jump into action. (Taken from the figure's packaging.)

Commentary: Nowhere on the package describes this figure as Commander Blackout, but this Stealth Operations Clone Trooper is referred to as that name on the box, and "Stealth Ops" on his trading card. A different clone called a "Stealth Ops Clone Trooper" was released about the same time, so this might be sort of confusing-- two nearly identical figures with nearly identical names issued at the same time. But how can you tell them apart?

The exclusive "Operations" version has only a blaster and the Galactic Battle Game gear, while the "Ops" version includes a rifle, a pistol, a jetpack, firing rockets, and a harness. Oh, and it's probably cheaper, too. That's the exclusive game for ya! The good news, though, is "Operations" has better deco-- note his helmet, while similar the other figure he has some yellow markings. And... well, I guess that's it really.

The body is the newer Clone body, with no ankle joints and only swiveling wrists. This means it's proportionally closer to the show, while being slightly less good at sitting down-- had Hasbro ever made that Stealth Ship from the series, he wouldn't be able to sit in it very well. Well, OK, he COULD-- but once you swing the legs forward, they do get a little loose until he morphs back into place. This is a fantastic stand-around-and-look-good figure. I dig it. But as an actual crew member for a vehicle, he may let you down.

Collector's Notes: A variant exists-- to add to the confusion, the exclusive figure sometimes shipped without the big silver "R" exclusive sticker. This means that at a glance, it's tough to tell that the exclusive version is an exclusive, and since Toys R Us mixes him up on the pegs odds are it's just going to confuse a bunch of people. Get him if you can-- but if you can't, there's at least one similar figure out there to be had. (Although to date, this is the more common of the two stealth clones.)