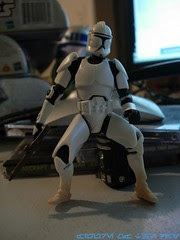 Bio: The Clone Troopers use speeder bikes for reconnaissance and fast-strike attacks during the Clone Wars battles. Small and swift, the speeder bikes provide the Clone Troopers with an excellent means of gaining information on the Separatist forces by approaching close to the opposing armies and retreating quickly with valuable intelligence. Their streamlined design and highly reactive maneuverability allows Clone Troopers to coordinate surprise attacks on small units away from the main Separatist armies. (Taken from the figure's packaging.)

Commentary: A repaint and remold of the 2002 figure, this Clone Trooper also includes a speeder bike except this one is painted differently and had some modifications made to it. The bike has a rocket launcher and a retooled pack on the back, while the figure has been repainted to have dirt on his boots.

The figure is a neat one, showing lots of promise-- but the execution could be better. The figure is sculpted with a black bodysuit, snap-on armor fits on his body and limbs to complete the look. The articulation is a little awkward, but it's largely good for posing the figure on the bike. As a toy, it's not very good-- keeping him on the bike with his armor attached is quite tricky, a simpler design may have made for a better toy. Newer figures may be able to fit on the bikes better, and the bike itself is a little soft in spots which makes it hard to display in the long term. You'll need to be careful with this one.

Collector's Notes: It's not even worth retail any more, and the main reason to get this-- or its 2002 predecessor-- is to store it inside one of your Republic Gunships.