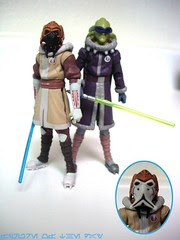 Bio: Plo Koon fights to free an ice-covered world from the Separatists. The Jedi general wears a special mask to protect him from Khorm's harsh environment. Traction spikes make it easy for him to move quickly over the snow and ice, as he fights a ruthless warlord and battles droids who are controlling an important source of fuel. (Taken from the figure's packaging.)

Commentary: Hasbro understands getting the most bang for its buck, which is why Plo Koon shares parts with Kit Fisto, both of which were released at basically the exact same time. The two share a number of parts, like bits of the torso and legs, which no doubt helps on keeping costs down. Both figures come from the comic books, which is a little odd as I think these may mark the first animated figures to come from print. Plo does not have articulated ankles, and the coat gets in the way of sitting, but aside from that is a great figure. I love that they included a snow mask for his regular mask, and the fact that it actually fits properly is a nice bonus. The snow shoes snap on to his feet nicely, but they're also sort of annoying-- Plo can't use his display stand and the shoes at the same time, which means either the stand is unnecessary or you're going to lose your shoes. Either way... hey, gear.

The figure looks good and seems pretty close to the comic book inspiration. Keeping elements from the TV show like his gloves and gauntlets while wrapping up his legs like a Tusken Raider, this is a figure with some excellent detail work and a folded-down hood for his jacket. As the hood is a separate piece, it's worth noting they gave Kit Fisto a completely different one to continue the illusion of the two wearing unique garments. If you like the look of this figure, I think you'll have a good time with it. As always cloth coats for improved sitting are preferred, but I'm more or less surprised we got any comic book figures for the animated line. I expect much complaining that we got these before a new TV show character, but the way Hasbro is with core characters in this line it seems that "snow" and "urban camo" figures are almost a requirement. I'd say get the figure if you're in to snow stuff-- the line seems to have a pretty good chunk of cold guys with Kit, Anakin, Obi-Wan, Rex, and at least one other Clone so far.

Collector's Notes: Despite being around for several months, this wave has not yet reached a saturation point. I've seen them come and go all the time, but now that we're on the cusp of a package transition it leaves one wondering if the "final wave" problem might end up being a final three waves problem. eBay prices are quite low given how difficult the figure is to find, particularly in lots. If you don't like risk I suggest grabbing it the next time he shows up in a lot at an average price of $8-$9 per worthwhile figure, or ordering a case if that's the kind of thing that you do. (Based on the mix, it's probably not the kind of thing that you do.)

Plo will be reshipping on 2012 cards, Kit Fisto is the one to get.