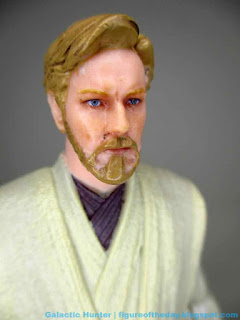 Bio: Obi-Wan is forced to battle his friend Anakin Skywalker in a devastating lightsaber duel after Anakin turns to the Dark Side. (Taken from the figure's packaging.) 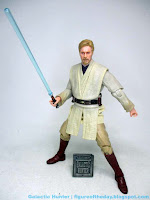 Commentary: I generally don't like dumping on figures, and I won't because this Obi-Wan Kenobi rerelease is an improvement on the worst The Black Series figure ever made. I think there's room for debate on if those Carbonized, Credit Collection, or Holiday Edition figures are any good (or not.) But the 2014 release of Revenge of the Sith Obi-Wan Kenobi looked bad when it hit shelves and today looks like a bootleg that you wouldn't pay a nickel for at the flea market... so of course it's worth over $70 on the secondary market. Just because something is worth money doesn't mean it is any good, but generally speaking valuable items may be worth revisiting. This one needs some new work, and enhanced deco isn't enough for him.

The original figure had an incredibly pale blue lightsaber, and so does the new one. I wouldn't say it's an improvement, but it's no worse - and it might be just a bit bluer and, surprisingly, thicker. As such, we can say well-ish done Hasbro, but a bluer hue would've been welcome. 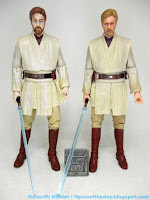 At first glance the figure doesn't look great - but compared to the previous edition it's a huge improvement. Compared to other 6-inch Hasbro Obi-Wan Kenobi figures (Phantom Menace, Attack of the Clones, and Clone Wars) it just looks awful. The head seems so thin and squished, the personality's not quite right, and if anything this shows that no amount of paint or correct colored plastic can save a doomed head sculpt. Over the years we've seen all sorts of great sculpts marred by weird skintones or iffy paint choices, which makes this figure - which is a bad sculpt with better but still bad paint choices - unique. The hair is too light, the skin tone is better and has hints of life thanks to a few rosy spots, the eyes are glossy and more lively. Lokoing at reference photos for the movie, his hard seems to be darker with grey temples - this figure just doesn't match it. I'm not sure why, either, it could've been an easy fix that may have distracted you from the parts of the beard are lacking in paint.

The body is pretty much the same, with boots that are too light and lacking in any real detail. The pants seem acceptable (and the same as before) and the robes are a bit more saturated - but the broad shoulders only make his head look smaller. It's doomed, but at least things like the brown under the chin and the belt are good.. The painted elements on the belt are placed better this time and the paint is overall improved, but when it comes to determining what makes a good figure, it ain't the belt. If the head or pose are bad, the figure sucks - and the joints are fine, but there's just something about the pose that doesn't read as good. But hey, at least the hands are a color that more closely resembles that of a human rather than that of a cake made to look like a human.

This is currently the best version of Obi-Wan Kenobi from Episode III in this Hasbro line. Other versions of him in other lines and scales are arguably better. Maybe you'll like it enough, but you're wrong, it's bad. At certain angles, in certain dark rooms, with just the right light, I admit the head is capable of looking pretty decent - but that's a lot of marks to hit to get a reissue from "worst figure ever" to "almost acceptable." This figure will sell and sell well thanks to the upcoming streaming show, but you can only lie to yourself so much about it being good. I wouldn't hold your breath for a re-redux, but I'd like to ask Hasbro to consider it for Revenge of the Sith's 20th anniversary in 2025. There's no reason for this to be the worst version of Ewan McGregor so far.