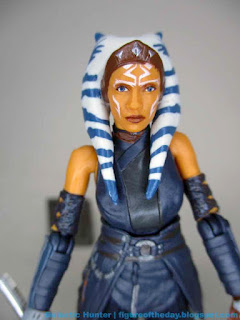 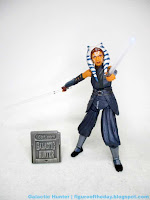 Commentary: The new stuff is good - Ahsoka Tano (Corvus) continues to show Hasbro can make great things when they aren't content to extrude a repainted reissue of a figure that's old enough to be a teenager. I'm really happy with these new ones, because - and this isn't meant to be back-handed - they aren't disappointing. We've had a lot of super-articulated figures that tend to fall over, or are hard to get to stand up when you put them in a slightly interesting pose. Ahsoka stood easily, right out of the packaging. I put her in a combat pose, put her on my desk, and she didn't fall over. I used to think that these figures just had to fall over if you did that - and apparently, I was being too kind. I just posed her with her sabers swinging in separate directions, legs apart, knees slightly bent. She's not wobbling or anything. I don't know what kind of alchemy they used to engineer, nor what kind of human sacrifice was made to make it happen, but it worked. 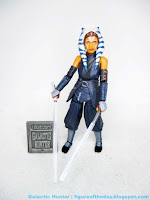 Leg articulation is good - the new-style hip joints have a good range of motion, but mine seem to have a little less tension. They're held in place well by the "skirt" piece though. The knees have joints hidden behind the pants, which work fairly nicely. The ankles also do their thing with no problems. Her legs do swing forward, but not as far forward, or as well, as other recent figures. But it's still more than a fair bit better than just about everything Hasbro has sold (and re-sold) you over the past decade.

Her interaction with the lightsabers was better than expected, with a grip that's tight enough to not drop them, but loose enough to allow her to give them a bit more direction than "runs perpendicular to arm." It's cool to see her thrust the blade out for a duel, and depending on the orientation of the hilt in the hands, you can get some interesting variations on how she grips them. Hasbro did great here - and of course, the wrists are jointed too. When I was a kid, the Kenner figures were really good but some held their weapons better than others. And with Hasbro, some of them were a fight to get them in the hands. This figure just works, and works very well.

Her sculpting, unsurprisingly, is great. The face sculpt looks just like the made-up Rosario Dawson, the headdress piece looks superb, and the painted facial features look great to my eyes. The stripes are excellent, and the headtails don't get in the way of her neck being able to turn... which would have been all but guaranteed had this been made in most eras of this line's history. Proportionally she looks great, her shoulders are excellent with mostly covered joints. If I knew we'd get figures sculpted and painted this well in the 1990s... well, I probably would have skipped buying a ton of other figures to wait for this one. We certainly wouldn't be staring down 3,000 reviews here. 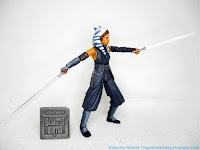 I sound like a broken record, but this Ahsoka figure is yet another one of Hasbro's best. You should get her. I'd go as far as to say all the new new figures - which can be hard to easily spot among the reissues and repaints - are shaping up to give this line a very bright future between now and the time Hasbro deems it unprofitable.