Star Wars Figure of the Day: Day 2,920: The Emperor (PulseCon/Throne, The Vintage Collection) 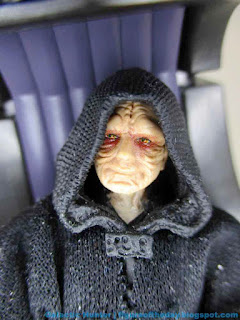 Bio: Rising from the north pole of the second Death Star is a 100-story isolation tower reserved for the Emperor, from which he oversees the battle station's operations. The tower's four spokes house a throne room, Palpatines private chambers, and a vault reserved for Sith artifacts. This throne room was the site of a climactic showdown between Jedi and Sith at the Battle of Endor. (Taken from the figure's packaging.) 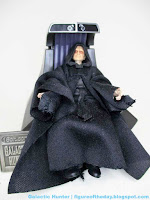 Commentary: The "just different enough to make you mad" mantra fit for figures based on this mold for a while. This PulseCon deluxe box throne room The Emperor is basically the same as the single-carded The Emperor [FOTD #2,885], but this version has a throne, a backdrop, and a new head. A better head! The superior head. But it also costs more than twice as much as the basic figure, because you're going to pay it, and it sold out, so you did. Samples on eBay go for over double the initial asking price.

For fans who buy boxed toys, I assume there's eventually a point where you just realize you're buying a box and the contents are probably irrelevant. If it looks cool, that's probably what counts - and this box looks cool. The wonderful package photography looks great with Luke and Vader (not included) dueling in front of the Emperor, and it's enough to distract you from the fact that the body for this figure has been used at least half a dozen times since its debut as an Evolution figure in 2005. The new cloth robes hide the very old (but good for the time) articulation, but they're bulky when he sits down and it doesn't look as clean as the all-plastic seated figure from a Cinema Scene from way back in 1998. 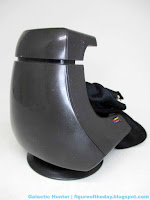 The head sculpt looks great, much more like what I imagine the character's make-up to look like. He's sitting, so there's no gnashing of teeth or snarl. He's just hanging out and making phone calls. It's what you want in a despot. The throne looks great with purple upholstery, silver and red highlights, and a rotating base. Why does it rotate? I don't know. But it does, and that's nice. The figure also includes Sith lightning and a cane in a tray under the throne.

What makes the figure set arguably worth it is a giant cardboard and plastic Death Star window plus a fold-out "diorama" in the box. It's not bad - but you're basically paying $32 for a $14 figure with a plush box. Is it worth it? Since it's a limited exclusive item, you may feel that it is. Since the head sculpt is good - and cheaper than paying someone to custom-sculpt one for your own - it's potentially worth paying for the very best. I don't grasp why they wouldn't just throw this head in the normal carded figure to get it out to as many people as possible and properly replicate the less furious face of the 1983-1985 Kenner figure, but that's me.

I wouldn't recommend him for the current secondary market prices, but if you ever see this sculpt reissued or used in a gift set at a price you can stomach? Buy it, it's a good head. The body is pretty blah, though, so perhaps Hasbro will make an all-new body some day. But it's been 17 years, so perhaps they won't.

Collector's Notes: I got mine on Hasbro Pulse.