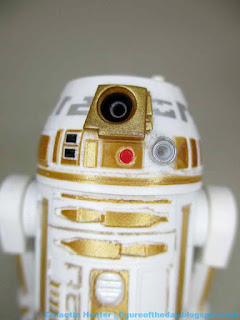 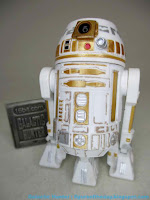 Commentary: This one is a bit of a mystery - I held off opening it last because R6-D3 looks like nothing special at first glance. I assumed it was a white R2 dome with gold highlights. Then just an R6- but it turns out it's a new sculpt! The shape is different. The "pie slices" are gone at the top, instead you'll see a blank canvas except for a motivator and some grime. Neat. The head itself is closer to that of R2-D2, with a big eye and panels much more in line with classic movie astromechs than the new model. It's easy to see how some could mistake this for a rehash of the same R6 droids we have seen for nearly a decade, but it's a new head. Rejoice! There are also a lot of silver patterns around the dome, giving it an unquestionably distinctive look. 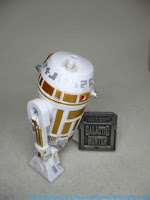 The silver and gold coloring look good, and the deco extends to the body. While the dome is new, the body and legs are pretty much what you've seen for years and may have one or two of. Or three, or four. Or 200. You know the drill - no foot wires, limited leg deco, but surprisingly ornate body paint. Nearly all the gold panels on the back are filled in, while the front is largely gold-filled with some dirt and grime for good measure. My sample has some paint alignment issues, but the design they tried to do is, in theory, good. You should probably make it a point to seek this one out in person if health/safety/personal preference allows just to be sure yours is a bit more aligned than mine. Or maybe you can just pretend that the entire marketing department of Industrial Automaton was first against the wall when the revolution came, and has already been punished for their paint crimes. 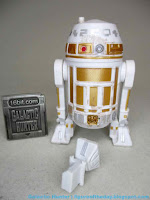 You may have noticed we made it this far with no mention of where he appears on the show. I have no idea. Sadly I did a rewatch just before it showed up and I'm not inclined to re-rewatch two seasons to find him, and neither Wookieepedia nor a basic web search point to the specific on-screen appearance of this one. As such, I can say it matches the photo on the box, and is a neat design in its own right. I really do like the pattern/lettering, new dome, and color choices - if this was just a new droid for the sake of a new droid, I'd say it's a good one. Is it truly authentic? Who knows. Was it memorable enough to deserve a figuer? Clearly not - but sometimes you just buy something because it looks cool, and this one certainly qualifies.