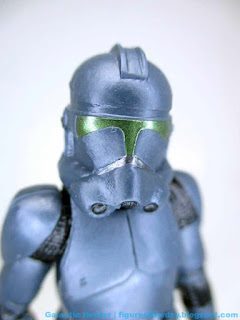 Bio: Elite Squad Troopers were special forces troopers who served the early Galactic Empire prior to the termination of cloning production on Kamino. (Taken from Wookieepedia. There is no bio on the figure's packaging.) 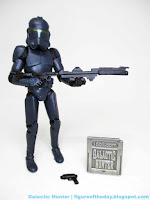 Commentary: One of very few unpunched carded vintage figures, this Elite Squad Trooper is part of an Amazon-exclusive The Bad Batch 4-pack loosely modeled after an old German exclusive package. You get a big box with 4 carded guys inside, all of which are effectively repaints/tweaks of existing figures. Since it has Rex in it, it's going to be a hit. This figure is technically not a clone, but it does wear clone armor, thus making it easy/fast to manufacture with no new tooling. That's a real time- and money-saver in this business.

Complete with glued-down helmet, this black repaint has a green visor, plus accessories. Firearms fans will enjoy a small DC-17 pistol, and a standard DC-15A blaster rifle. As always, they fit the hands just fine. 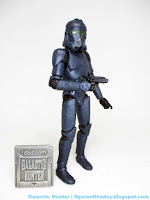 The base figure is the Clone Trooper mold we first got around 2011 with a Phase 2/Revenge of the Sith-style helmet. This is kind of funny, because that means the base mold is 11 years old. To put that in perspective, Kenner's original Star Wars figure line ran from 1978-1985, so what we consider to be the newest and best mold is, in toy industry years, positively ancient. It's still pretty good - the hip joints are a little antiquated given what we've seen as of late, and neck and shoulders are a little stiff, but he's generally thinner and looks better than his forebears. Despite not having rocker ankles, he looks pretty good! Unfortunately figures from that era weren't designed with balancing well in mind, so he may look a little awkward and stand a little funky if removed from the packaging.

Given what I assume was Hasbro's mandate - use existing tooling to make The Bad Batch action figures in a hurry - they did a good job. (Why we got 6-inch molds of the actual batch and not 3 3/4-inch, I can only speculate.) From a development perspective, this is a good figure. But it's also an army-builder, which means putting one of them in a gift set is just irritating to anyone wanting a second or third black trooper. Hopefully Hasbro will either release singles or a multi-pack of black troopers later, but given how The Vintage Collection has gone and we've only had a couple of Imperial Stormtrooper multi-packs for army builders over the course of 44 years, I wouldn't hold your breath. Just get this one now, or the 6-inch one if you prefer, because it'll probably be a long wait before they put out something else in this size. (Also the set is kind of expensive for what you get - about $15.75 per figure before tax.)

Collector's Notes: I got mine on Amazon.