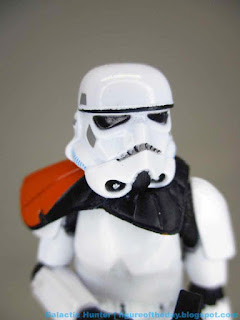 Bio: Stormtroopers are elite shock troops fanatically loyal to the Empire and impossible to sway from the Imperial cause. They wear imposing white armor. (Taken from Hasbro Pulse. There is no bio on the figure's packaging.) 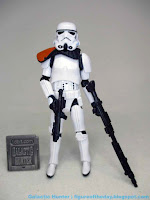 Commentary: I went ahead and ordered this box of four Stormtroopers because this one was different than the other ones I had. You see, this one has an orange pauldron - but otherwise it's the same as the 2019 Imperial Stormtrooper [FOTD #2,598]. This is to say, it's more production of the best version of the trooper we've seen released thus far, but what may be a slightly better one is up for Walmart's future exclusivity. But for now? This is good.

Four of this figure is packed in a box - one has a pauldron, three do not. This one has iffy mouth paint on my sample, but it's otherwise a pretty great trooper. Check out the articulation - it's good! He can move well. The wrists have extra joints, he can hold his blasters, the soles of his shoes are painted, and you pretty much get everything you could want on a clean white Stormtrooper other than a holster or even more gear. It meets all requirements, and it's nice to have a slightly different trooper to add to your Disney-era armies. 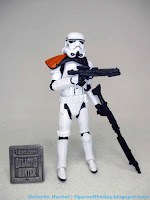 The classic Stormtrooper blaster has the added extra scope thing on all the Disney-era blasters, but lacks the painted silver element of the previous single-carded trooper. It's just black. The longer rifle is just a longer rifle - perfectly good, and a nice bonus.

If you want more Stormtroopers, and they become available again, you should buy this set. Even if you don't like the pauldron, you can pop it off - but I like it. Back in the 1990s, Kenner customizers would make Sandtroopers with just the pad - usually they have more ammo pouches and backpacks in the films, but in the era of VHS and little to know reference materials, most fans didn't think to build them out. As such, this is sort of retro, but more accurately, this is how some troopers looked on Rebels and subsequent OT-era movies. Minus the lenses, which tend to be known to be green now, and this one is black. As such, if you're looking for the best version of the Stormtrooper as you may remember it, this is probably it. But if you have that recent The Vintage Collection figure and don't care if you missed a shoulder pad, then you can skip it. I just assume everyone wants more troopers so I'd nudge you to get it if life permits.

Collector's Notes: I got mine at Hasbro Pulse. As of my writing this, it's sold out, but it's been available and not available several times over the past year.

As someone who's recently narrowed his Star Wars focus to the OT, it's a bit disappointing that this Stormtrooper doesn't have the holster, and that the pauldron doesn't include the ammo pouch.

Should the 4-pack be re-offered, I wouldn't be surprised if it was upgraded to include the Walmart Stormtrooper as well as the ammo pouch if only to help take the sting out of the inevitable price increase.