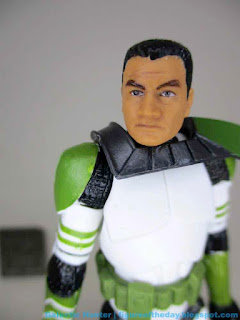 Bio: CC-10/994, who also went by the nickname "Grey," was a Clone Captain who served in the Grand Army of the Republic during the Clone Wars. Assigned to Jedi General Depa Billaba, he was a Clone Commander in the general's battalion. Surviving the decimation of Depa Billaba's battalion, Grey was reassigned to a new battalion, also commanded by Billaba, along with Clone Captain "Styles." (Taken from Wookieepedia. There is no bio on the figure's packaging.) 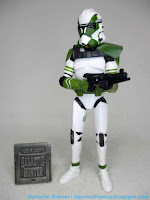 Commentary: Over 10 years ago, back when Figure of the Day really was every day, I had a month where I basically trolled readers by doing a Clone every day. We got so many Clone Troopers that the line was basically all clones - and readership really took a dive a couple of weeks in. And today Hasbro gives us Clone Commander Grey, the TV version of the character as the trooper who made Kanan Jarrus's life awful during Order 66 was red in the comics. So maybe we'll get another one down the road. It's a good figure, but is it exciting? No, of course not. But it has a stellar face under that helmet.

A realistic interpretation of the CG-animated The Bad Batch trooper, has a darker green and less battle damage than on TV. The patterns are quite similar, though, so you'll get the stripes on the arms, the green shoulders, and the pad. The helmet does a good job replicating the pattern (but not color) from the s how, with a body that's teh same one we've been getting for about a decade. It's not bad, but it's out of date. The figure's chief highlight is the head. It's great! The hair looks good, the face paint is exceptional, and there's a decent resemblance to Temuera Morrison. I particularly love the wrinkles in the forehead and the signs of weariness around the face. I bet this would make a good Boba Fett face with less hair and more scars. It's really easy to like, and I think you'll be impressed if or when you see it up close for yourself. 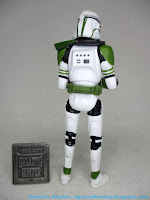 Hasbro has made over 275 - probably over 300, I haven't reviewed them all - Clone Troopers since 2002. It's kind of draining. "We made the same guy again but the colors are a bit different and maybe he has different hair" is sort of soul-crushing, especially when you have a character like this who amounted to little more than a cameo in the rich tapestry of hundreds of episodes of Star Wars (with more time on comic pages... but he looked different.) In and of itself, this is a nice looking figure with cool armor and a stellar head sculpt. I just can't say that I feel much of anything now that I own it, especially after all the pre-order drama on Amazon not allowing people to place orders for several months after it launched. (Also, it got a price increase after being in stock for a few weeks and not selling out - as I write this, it shot up to $66.99 from $62.99.) It's not like this figure is bad - it's just hard to say it's worth 25% of $66.99 if you already have a healthy Clone collection. But if you don't already have dozens or hundreds of Clones, this is a good one, and one to display with the helmet off since the face is so good.

Collector's Notes: I got mine on Amazon.