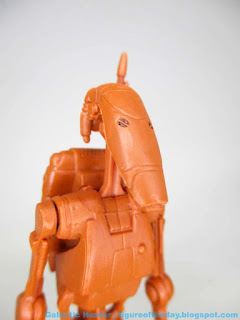 BATTLE DROID Red Redux
The Vintage Collection Walmart Exclusive
Item No.: No. F5865
Manufacturer: Hasbro
Number: #216
Includes: Antenna, backpack, blaster
Action Feature: n/a
Retail: $13.47
Availability: March 2022
Appearances: Clone Wars
Bio: Battle droids are dim-witted and no match for clone troopers or Jedi, but they weren’t designed to be smart – they were designed to overwhelm through sheer numbers (Taken from the web site. There is no packaging copy.)

Commentary: When fans clamored for more The Vintage Collection in 2017 before its reintroduction in 2018, I don't think this Battle Droid was what they had in mind. We've previously had this mold in a few colors - including a Battlefront red edition - so bringing it back in a slightly more saturated red with minimal paint and no battle damage is less of a "finally!" and more of a "eh."

The figure itself is nothing new - it can crouch down to be loaded in that MTT you forgot to buy when it was on clearance. The ankles are jointed, you've got your choice of antenna pack or backpack with antenna, but thanks to the thin limbs he's going to fall over without added upper-body support. The elbows bend, the shoulders have a little give to them, but if you want to mount the blaster to the backpack, you're out of luck.

With the only paint on the figure being its black eyes, it's not a stretch to be able to applaud Hasbro for accurately recreating Genndy Tartakovsky's excellent cartoon styling. The droids in the cartoon are clean and red - and this figure applies that deco to the 2012 The Vintage Collection Battle Droid mold with no thought for improvements or enhancements. A little silver on the antenna would be nice, but it's just bare plastic. Conversely, the blaster barrel has some extra silver on the tip which wasn't on the cartoon. Why? I have no idea. But it does look nice.

Over the last 23 years, we've seen lots of new changes made to the Battle Droid mold, but the 1999 originals seem to be sturdiest and offer quite a bit of playability. Sure, you can't pivot the shoulders or move the ankles, but they were a bit easier to keep standing and it was nice to plug the blasters in the backpack. I applaud Hasbro's cleverness in squeezing another line of repaints out, but it's also kind of hard to get excited about a second red Vintage Battle Droid in less than a year when there are reissues that are still in demand like Revan or the like. But hey, it's still a nice batch of figures and they'll go great with the 2008 The Legacy Collection wave 2 what with its Quarren Soldiers and Quad Cannon Clone Troopers. Hasbro certainly seems to be putting together a line for fans who are with it for the long haul, but given the last emphasis on this micro-series was around 2008... that's more patience than most fans should be expected to have. I'd say get this droid if you're in need of more robots, but I'm guessing mine is about 30 minutes from winding up on a shelf I won't touch for years.