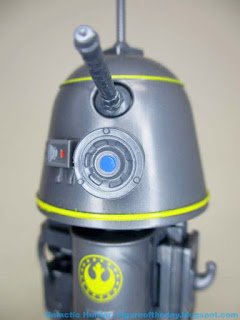 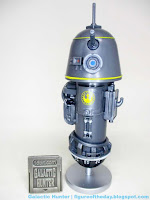 Commentary: The Mandalorian and his crew roughed up some New Republic R1 droids in the first season of the show, and unfortunately the boxed set will not make it conducive to army-build this one. While incredibly similar to other R1 droid figures, each part seems to have new tooling so despite appearances it's not just an old droid with a few new greeblies. It's a new droid. 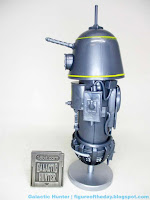 It's pretty good, but the colors seem off - the gray is too light, the eye doesn't seem blue enough, the yellow pinstripes and New Republic symbols seem a little pale. The general shape seems spot-on, and you can rotate the head and the, uh, secondary head. (It's a distinctive shape down there.) Thanks to the lack of jointed limbs, the figure is basically an accessory - it can stand around and turn the head, and that's about it. If you like what you see, that's the figure.

I can't say I'm overly impressed by this one, but the form factor is correct and the colors could be improved a bit. It's fine, but it's not great. "Fine" works for figures that are made before the show airs, or from unfinished reference files, but they had a couple of years to get this one right and the colors just feel off. It should look fine on a shelf of robots, and if Hasbro or Disney ever build out the crew from the jailbreak episode you'll undoubtedly want more R1 droids. This figure might be worth getting to future-proof your display, but the set is off-model in enough ways that some may want to wait for a better version later. I am hesitant to believe that day will ever come unless a lot of people at Hasbro, Disney, and Lucasfilm get rotated off these brands and bring a new direction to the line, so get this one and enjoy it. It's a lot better than nothing.