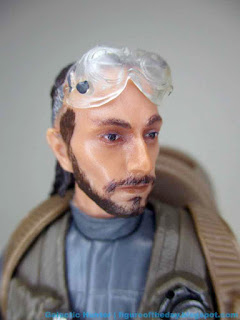 Bio: A former Imperial pilot, Bodhi has strong piloting and technical skills that he will put to use for the Rebellion. Ever practical, but highly anxious, Bodhi must gather his courage to bring the battle to the Empire. (Taken from the packaging.) 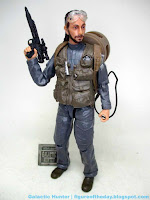 Commentary: Part of a fifth anniversary mini-line for Rogue One, Bodhi Rook brings another member of the cast to figure form, finally! Most of the major players now exist as 6-inch action figures, and this one has the added benefit of using a uniform that's probably pretty easy to retool to make other characters like an AT-ST Driver down the road. (We'll see next year, I guess, given it's the 40th anniversary of Return of the Jedi.) 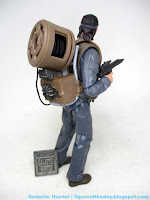 For the money, it's a good figure. You get a 6-inch Riz Ahmed with goggles stuck to his head - and he looks great. The uniform is pretty generic, but true to the movie. Hasbro put in deep elbow cuts which give the pilot excellent range of movement, and there are a lot of painted elements on his vest and sleeves. He can stand, he can sit, the legs swing forward nicely, and everything works as well as you might hope. I wish I could say the figure surprised me, but on the whole collector figures can't/won't innovate - they meet expectations, or they're despised. This one meets expectations, giving you everything you might expect without challenging you with too many bonus features.

Bodhi does, however, have something you can play with. The removable backpack has a ripe in it, and you can retract the cable from the movie's climax up in there. The lid comes off so you can re-wind it, as there's no spring-loaded mechanism or other special parts. It's finger-powered. It looks good, but not particularly ornate. It's brown... beautiful brown. Bodhi also includes a blaster, cast in a somewhat light grey color that looks more like a figure accessory than a movie prop. Some paint, or a darker color of plastic, would have done wonders to make it great. As it is, it's good. Bodhi's accessories are largely better than most new figures we've received in recent years because they do things, and that's a lot more fun than having a small piece of plastic for you to lose in a box somewhere. 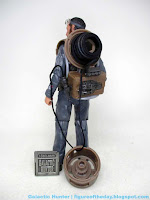 Along with the new face paint reissues, Bodhi is arguably a must-buy figure if you're a fan of the scale. The figure turned out better than I could expect, with accessories that were engineered better than I could have hoped. I like it, and I assume you will too. I've been very happy with the 3 3/4-inch kid toy version, but this is a lot better. His hair and ponytail are great, the eyes are lively and shiny, the goggles are clear, and he looks like the actor who plays him. I don't think we could ask much more from Hasbro, other than maybe putting him out five years ago, but that's sort of impossible at this point. Get it now. Collector's Notes: I got mine from Entertainment Earth.