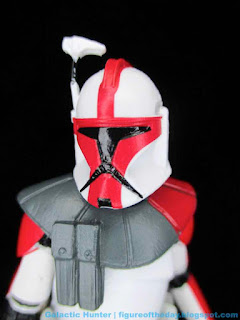 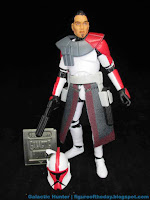 Commentary: While some may mistake this ARC Trooper Captain for a new retool, it's a 2011 figure with less gear. The original release had a figure painted up to match Fordo in his Phase II armor, but the figure was tricked out with Phase I and Phase II accessories - you really got your money's worth! This 2022 release drops all Phase II gear, and Phase II deco. And it costs more. Progress?

Like most The Vintage Collection figures, it looks good yet shows signs of age. The original mold was used back in 2011, which is 11 years ago, which means more time elapsed between this figure's first (underserved) release and this reissue than passed between Kenner's final vintage-era Ewoks and Droids figures in 1985 and the relaunch of The Power of the Force in 1995. That's a long time. That means that articulation has improved significantly since this once-gold-standard mold was released, so we don't have things like thigh swivels or some of the recent excellent hip joints. He'll stand, but the legs don't move quite as well as you might want, nor do the shoulders swing out particularly well as aesthetics were prioritized over functionality in that era. But he looks good. Especially if you don't open him. A "photoreal" face with a fauxhawk sits under the helmet, which has been painted exceedingly well with bold black lines resembling the 2003-2005 Cartoon Network series. The white rangefinder looks great, and the red stripe matches the pauldron and the largely corrected red armor markings. If you want a first-appearance Fordo figure, this one is excellent if you can get it. The white is bright, the red is vibrant, and right now everything seems to match nicely. Just don't expect this figure to do much sitting, despite the cloth kama. It's a good design, but for whatever reason sitting just wasn't a priority for a good long time. 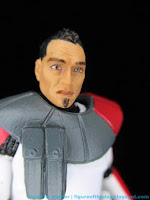 If you can find it I recommend it - even if you have the 2011 ARC Trooper Captain. You should leave that one in "Phase II" armor with the other helmet and bandolier, and leave this one with the Phase I gear as shown, and you'll be happy to have both. It's a compelling reason to buy both figures - pending availability - and I hope Hasbro made enough of this guy to go around. He'll make a lot of people angry, provided you can actually get your grubby mitts on one somehow.

Collector's Notes: I got mine from Walmart. I missed the pre-order and lucked into finding it online in stock.